LAST OF THE 'WILD' BLACKS

Onyong was a well known Aboriginal man and leader of  his people (Ngambri/Nugunawal? here) during the time of early European settlement of the Limestone and Tuggeranong Plains in the 1830's. Onyong's home-base was located on the Tuggeranong Plains although he was known to travel extensively - as far as Goulburn and Bungonia to the northeast, Mannus to the southwest and the Bogong Mountains near Tumut to the west. 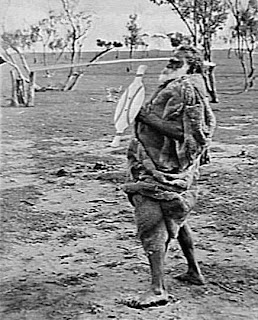 Aboriginal Man in Possum skin cloak
Image Museum of Victoria (here)
Two groups of Aborigines are recorded in the Canberra Region in 1834 - the Hagen-Hope tribe (46) and the Nammitch tribe (60-70). The chiefs of these two groups were recorded as Jemmy the Rover and Onyong respectively. The members of the group under Onyong were described as:

In 1841 the Colonial Government blanket issue at Queanbeyan listed both men as belonging to the Hagan-Hope Tribe (for some reason the two groups had merged) now numbering only 56. 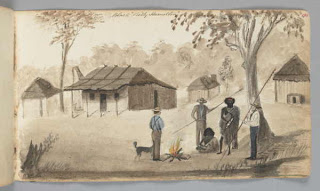 Image State Library of Victoria (here)
Moore of 'Canberry' Station described Onyong as 'A ‘tall burly man’, he cut an impressive figure to all who met him. His leadership of his people was recognised among the European settlers. Onyong was feared by some settlers and he often raided their stock, but he struck up a respected friendship with ex-convict Garett Cotter (here) and the two spent much time together'.

Wright (owner of Tuggeranong here) mentions that Onyong was once caught by Henry Hall of Charnwood spearing livestock and consequently was 'shot in the leg'. During the 1840s Onyong's band maintained a close relationship with the Wright family at Lanyon (here), and it was known that there had always been rivalry between Hongyong and Jemmy the Rover over tribal leadership issues. 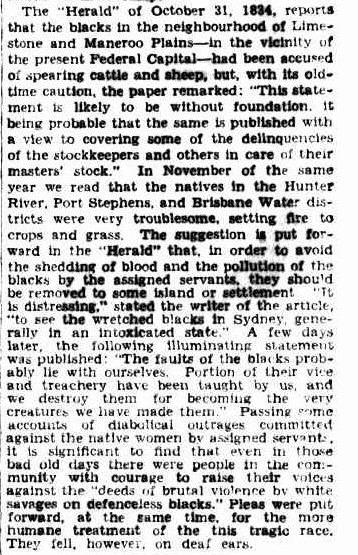 Terence Aubrey Murray of Yarralumla (here) concerning the employment of Aborigines in 1841, remarked:

'... they in general shew [sic] a determined dislike to settled habits of any kind ... their love of independence is too great and habits of wondering too strong to admit of it .... they are so wedded to their own habits - supporting themselves with so much ease by the chase - that it can scarcely be expected they should adopt ours'.

Sometime between 1847 and 1852 Onyong was killed by Jemmy the Rover, as '...while the latter was away Onyong had usurped his position as chief'.

Wright records the burial of Onyong, who, he stated was the chief of the Kamberra tribe. The site of the burial was on top of a stony hill about a quarter of a mile from the Tharwa bridge (here). The body was trussed in the knee-elbow position, and the fat about the kidneys was removed. The fat was supposed to possess great virtues, and was distributed to the gins (women), who carried it in the bags which were hung from their necks. A hole was dug in the ground, at the bottom of which a small tunnel was excavated. In this tunnel the body was placed, together with the chief’s weapons (a broken spear, shield, nulla-nulla, boomerang, tomahawk, opossum rug, and other items) for use in the next world. The grave was then filled in. 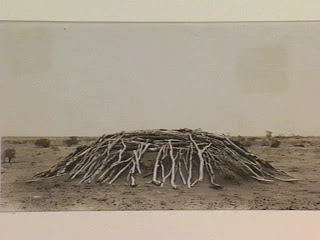 Aboriginal burial mound.
Image State Library of Victoria (here)
After Onyong's death the colonist's stock, crops and fencing removed the areas where Aboriginals could maintain a traditional subsistence lifestyle whilst at the same time European Illnesses were (inevitably) introduced such as smallpox, decimated the population. Half-Castes tended to remain working on local stations, some dispersed to other tribes in other areas and others went off to the gold rushes at Braidwood, Araluen. Majors Creek, Kiandra and Adelong.

In closing I leave the following quote from James Wright about the eventual fate of Onyong's remains. I think it is a pretty good indication of the European's attitude to Aborigines of the day...

'Well, that was the end of that 'worthy' with the exception that a number of years later a man named Smithie dug up the skull and with questionable taste had it made into a sugar bowl, which I actually saw in use on his table.'

There is a very good read (here) about European and Aboriginal interaction at the time of settlement.

And a good read (here) by the Canberra History Group 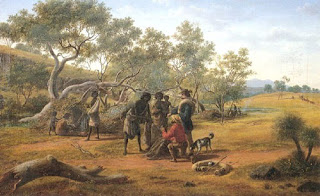 
UPDATE - There is a video version of this post here.
Onyong (or Hongyong) is buried somewhere around here.