The Pine Island area seems the probable place of the Murrumbidgee River's discovery. Charles Throsby (1777-1828) (bio here) on his exploration south learned from the Aborigines through Joseph Wild (1773?-1847)(bio here) that there was a large lake,(Lake George). About two days journey from this lake there was a large river, which they had called Murrumbidgee.

Throsby determined to discover the Murrumbidgee River left Throsby Park near Moss Vale in March, 1821. He was successful in locating the river. It is certain, however, that he traveled over the site of Canberra; that he traced the Molonglo River towards its junction with the Murrumbidgee, and that he discovered the Murrumbidgee, probably, a little below Point Hut crossing. Probably the Pine Island area.

Later an expedition was undertaken by a naval captain named Mark John Currie (bio here), and the brigade-major and captain of the 74th regiment, named John Ovens both of whom were untrained in bushcraft. In May, 1823, led by Joseph Wild, they left Throsby Park to explore the country south of Lake George. On the 31st May, they camped on the river near the site of Queanbeyan.

On the following day, they crossed the Limestone Plains; discovered a small plain which they named Isabella's Plain (now known as Tuggeranong) in honour of the daughter of Governor Sir Thomas Brisbane; arrived at the Murrumbidgee River; and, after ascending its right bank, being unable to cross, camped somewhere near Tharwa.

During the following five days, they traveled southerly, more or less parallel with the Murrumbidgee River and on the 6th June, discovered the fertile plains which they called Brisbane Downs, now known as the Monaro Plains.

The time of discovery closed with this expedition, and was followed immediately by the time of pioneer settlement. 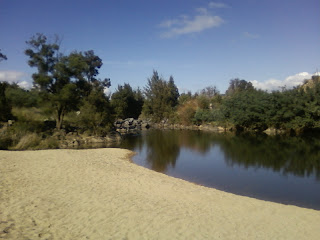 Now a popular swimming and BBQ spot for Canberrans