A recent trip down the Batman Track in the Blue Mountains saw us camp for two nights next to what I highly suspect is an old Aboriginal Scar Tree. 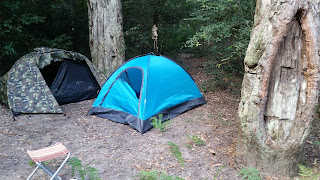 Strangely I did not notice it when I arrived and it was only after pitching my tent and sitting by a fire did it suddenly catch my view. What the purpose of this particular tree was I don't know. The removed bark can be for sheilds, woomeras, if large enough, canoes and other useful items needed in Indigenous culture.

The scars can also indicate a place of significance and even burial. This was a thought that came back to me when I soaked in the beauty of the camping spot, a place called Martins Pond where lyrebirds forage in great numbers protected by their pristine and secluded environment. 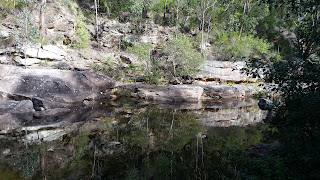 It was indeed a special place but a trek I am unlikely to ever repeat. The 2-1/2 hour walk out, though beautiful, was too challenging for me but for those a bit fitter I highly recommend the adventure.
- May 30, 2017

A visit to the Sanctuary at Tidbinbilla Nature Reserve last week. No sooner had I entered the imposing steel double gate and walked 20 meters before I heard a rustle at my feet and before me was a very photogenic Bandicoot. He or she allowed me to follow for a while leaving the best footage till last.. So much to explore there..

Earlier in the year I set a camera trap and an audio recorder down an abandoned fire trail on Gibraltar Creek in the Australian Capital Territory. I managed to capture several ten second bursts of video showing a troop of Lyrebirds going about their business. The soundtrack to the video is the birds calls around the same time as the video was captured.. I suspect I have discovered a display ground. A revisit is planned at the height of the mating season mid winter. 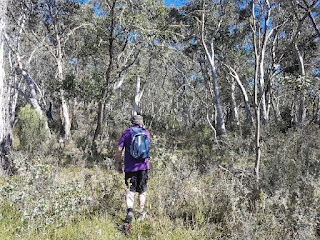