Canberra's first arboretum (info here) was established at Westbourne Woods in the Canberra suburb of Yarralumla. In May 1913 horticulturalist Thomas Charles George Weston (1866-1935)(bio here) was put in charge of the afforestation of the new city of Canberra.

The establishment of gardens, parks, and plantations (post here) were to be Weston's responsibility whilst at the same time propagating for and establishing a forestry industry in the area of the Australian Capital Territory.

Weston had to overcome the remoteness of Canberra's location, infertile soils, windswept plains and rabbit infestation when he began establishing plants suited for Canberra's developing landscape. He also wanted to reserve all hilltops around Canberra preserving their tree cover enabling the collection of native seed. 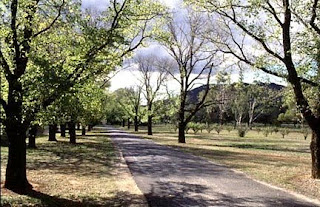 Weston established the Yarralumla Government Nursery complex the same year. Weston also tried to ascertain which species of trees were the most appropriate for the Canberra climate. Westbourne Woods, which covers 120 hectares (296 acres) was named by Canberra's architect Walter Burley Griffin (1876-1937)(bio here) and is shown on his 1917 Canberra plan.

The woods were an experimental planting of various exotic species on a site chosen by Weston for it's relatively good soil, permanent water supply and the expectation that one day it's location might make it a public park. 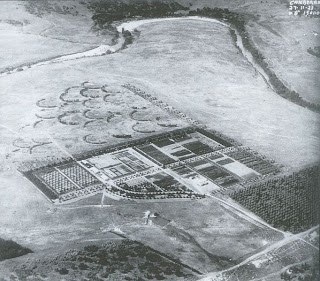 In 1914 the holes to plant the tree's of Westbourne Woods were created using explosives. Weston theorised that the fragmentation of the ground from the explosion would be more beneficial to the plantings than hand-dug holes.  More than 200 different species of conifers, exotic hardwoods and native Australian trees were planted, between 1914 and 1918. By 1920 planters had established 44,900 exotic trees. The Arboretum provided the 12 year old cedars in 1926 that were planted in front of Parliament House for instant effect on the occasion of its opening in 1927.

In 1945 Westbourne Woods was transformed into a golf course in an attempt to conserve the woods. Fairways were cleared and grassed and water was to be supplied by the Molonglo River and later by the new Lake Burley Griffin that was to be filled in 1963. Many of Canberra’s street trees were chosen because of their success in early plantings in Westbourne Woods. The woods are still used occasionally as a source of propagation material by Yarralumla Nursery.

Westbourne Woods is listed on the ACT Heritage Register. 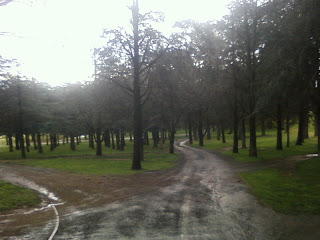 A view into Westbourne Woods.