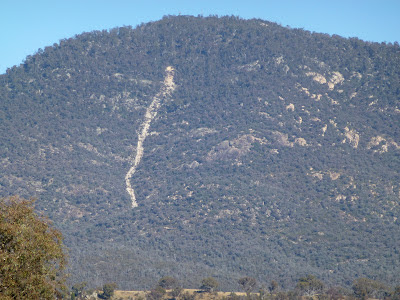 I stopped today to take a few pictures of the 'scar' on Mount Tennent ( Or Mount Tennant if your thinking about the bushranger) I had no idea what caused it but did know of two Canberrans who have climbed up to inspect it. Tim the Yowie Man and John Evans of the Canberra Bushwalkers Club. 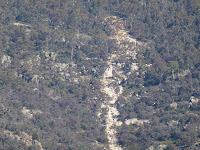 As I said I have no idea what caused the scar so its best to get it from someone who has been up there.

"An incredible sight. Tim the Yowie Man had visited it from the bottom and said it was mainly mud - indeed it was. A huge earth and rock slide, with scrapes 2m up tree trunks. A little water still dribbling out of the soil. We sat on the granite tors on the side and had morning tea.
We continued up the side of the scar, Max keeping it interesting with a little scramble that required a rope. We passed a huge boulder that we'd seen from morning tea - I wonder when it will go Then out onto the scar - a huge amount of earth and rock. Quite a puff to climb the 110m vertical metres and 175m across the ground from morning tea to the top of the land slide, at GR 85564-64387 (MGA94). Several theories as to how it was caused, too much rain and the ground slipped was the consensus."
John has a post from a second walk of the scar 19 May 2012 - Mt Tennent scar from the top
where he took a few short videos at different stages of the descent. John's YouTube channel...