Operational from 1913 to 1976. The brickwork's made the bricks for construction of early buildings in the National Capital.  It has several different kiln types one being very rare as the only one of it's type left surviving in Australia (The Staffordshire kiln). The brickworks provides tangible evidence of the city's construction.The Brickworks are significant as a large urban brickworks, which are becoming increasingly rare both nationally and internationally.

Lack of regular maintenance and willful neglect of the structures by successive government bodies over the years has led to deterioration of the brickworks. The National Trust believes that the "Old Canberra Brickworks" is under threat of deterioration and devaluation of it's Heritage Values and believes that the place be made available for appropriate occupancy and use. (Apparently there have been several recent ideas that haven't eventuated)

"The community is being invited to help determine the future of the iconic Old Canberra Brickworks site in Yarralumla, with a comprehensive consultation starting in the coming weeks"

Note: I think appropriate utilisation would be a wonderful solution I am sure this can be developed to be self supporting as the large brick lined kilns can effectively be used as shop spaces. I can remember in the early 90's when an ACT charity hosted an annual Antiques fair that was hugely successful. The kilns were perfect. I hope they don't bulldoze and sell the extremely valuable land.

Today the brickworks are closed to the public...

The Wikipedia entry is (here) 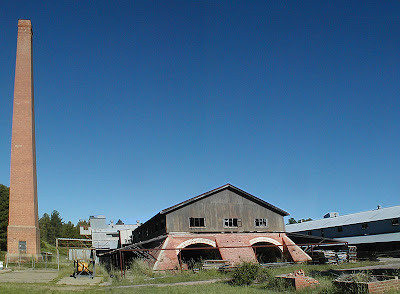