'Woden Homestead' is the oldest domestically occupied building in the ACT. It has a strong association with the early development of the region and with important figures in the region's history, including a lengthy connection with the Campbell family. The property still operates in a reduced capacity. I am still researching the property. 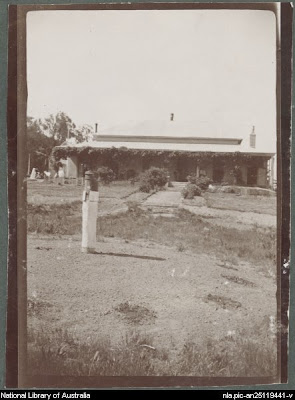 Woden Homestead (circa 1904-14)  Image NLA (here)
Woden Valley was a sprawling plain in a beautiful valley that nestles between Red Hill and Mount Taylor in the (now) Australian Capital Territory. It was once a plain consisting of large areas of stock fodder with scattered woodlands. The length of the valley was watered by the Creek (or Yarralumla Creek). The creek flows to it's junction with the Molonglo River below the Yarralumla Homestead (post here). 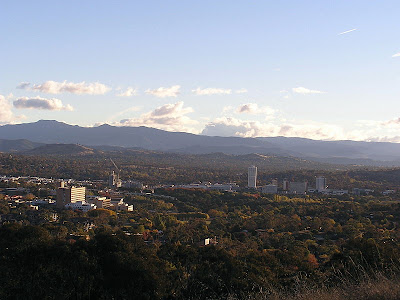 View from Red Hill across Woden Valley to  Mount Taylor.
Image Wikipedia commons (here)
The Woden Valley was owned by Dr James Murray who purchased 2,500 acres (1,012 hectares) of land west of the 'Limestone Plains' in 1837 that was destined to become Murray's Station .  Murray named the property after either the Old English or Norse 'God of War' ('patron of learning' or 'God of wisdom)'. He was reportedly quite a studious man and his  lifetime pursuit. was the 'seeking of knowledge'.

Woden Valley today is a town centre of Canberra, the name taken from the original nearby homestead and station. During the 1960's the area was quickly covered by suburbia established for the growing population of the National Capital.

The Woden Valley became the first residential development outside of the central Canberra area (Limestone Plains) and set the pace for the City of Canberra's future expansion into the plains of the Australian Capital Territory. The Valley now boasts 13 (inner south) suburbs arranged around the Woden town centre and has a population of approx. 32,000. 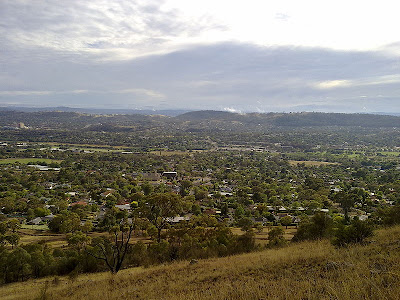 View from Mount Taylor across the Woden Valley to Red Hill.
Photo Wikipedia (here)
Today the creek is a stormwater channel. It emerges through large stormwater pipes in the Woden Valley suburb of Mawson before flowing  along through a large stone and concrete channel until it leaves suburbia. In the 1960's and early 1970's the open and accessible storm water channel and pipes were a childhood venue for bike riding and exploring. The creek where todays Marist College (post here) football ovals are was a flat piece of swampy ground perfect for catching frogs and tadpoles. 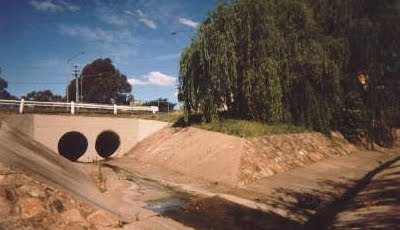 Drains entering the creek at Royal Canberra Hospital
(Woden Valley Hospital).
Whilst Canberrans were celebrating Australia Day in 1971 a flash flood surged through the Woden watercourse and engulfed Yarra Glen, a road intersection the drain passes. People were washed away and others were pulled from more than a dozen cars (including my future wife and family) that were swept off the road into the raging torrent. The creeks flow was reportedly increased by excessive stormwater runoff from suburbs that 10 years before had been sheep paddocks and scattered woodland. The flood killed seven people by drowning or injury.