The original settlers of the 'Limestone Plains' (present day Canberra) came to the new territory with basically only their flocks of sheep and small herds of cattle. Upon arriving to establish a 'station' or 'run' tents were used by the new colonists as accommodation until such time as slabs of timber were split and used to erect 'slab huts'. 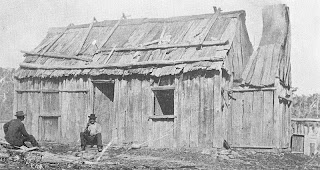 Native timbers of the area were used for housing, stockyards and outbuildings. These huts were replaced over time by more substantial timber houses and sometimes of pise' (rammed earth) like Rose's Cottage (post here) at Isabella Plains. The more substantial homesteads, buildings and church were built of stone.

The Duntroon Dairy (post here) built  in 1832 was the first stone building on the Limestone Plains. It was made of material collected from the adjacent Mount Pleasant. In 1833 the owner of the 'Duntroon Estate' (post here) Robert Campbell (1769-1846)(bio here) ordered a stone dwelling be built on his land. He called that dwelling 'Limestone Cottage'. 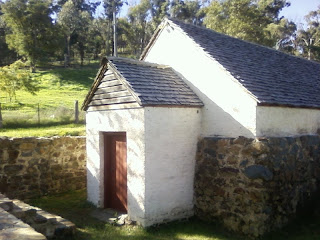 The nearest settlement in the 1830's was many weeks journey through rugged bush land with many water crossings along the way. The road (track) south from Sydney that was established by convict labour was not appropriate to carry heavy loads. Early settlers had no choice other than to be self sufficient in their appropriation of building materials. 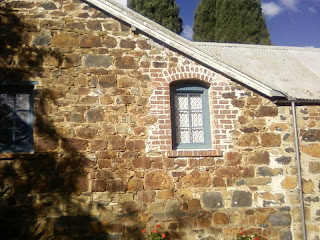 Between 1840 and 1845 the quarry supplied stone for the St Johns Anglican Church (post here) and schoolhouse paid for by Robert Campbell and built on land donated by him to the church. He and family members are buried there. 'Blundell's Cottage' (post here),
a small stone cottage on 'Duntroon' was built about 1860. 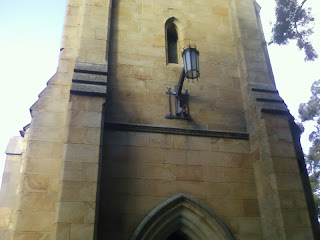 The stone of St John's Church

Today the area at the face of the quarry has Australian National University buildings on it and is not open to the public. The photos below are pretty poor because the weather was wintry and it was pouring rain. 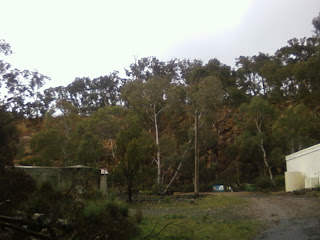 Towards the rock 'face' of the quarry. 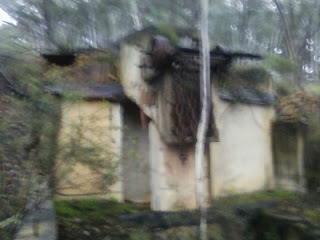 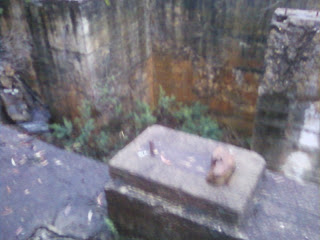 A pit in front of the bunker. 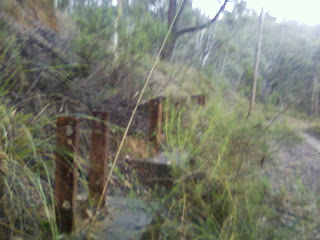 Further down the hill?