The first sheep station on the 'Limestone Plains' was established in 1824 by Joshua John Moore (1790-1864)(bio here). Moore became the first pastoralist of today's Australian Capital Territory when he was granted a ticket-of-occupation for over 2000 acres (over 809 hectares) on the newly discovered 'Limestone Plains' (todays Canberra).

An overseer and a number of Convict stockmen of Moore's constructed 'slab huts' and stockyards on Acton Peninsular at the base of Black Mountain. The property was originally called 'Canberry' after the Aboriginal word for the area. Today's National Capital of Canberra is named after this word meaning 'meeting place'. 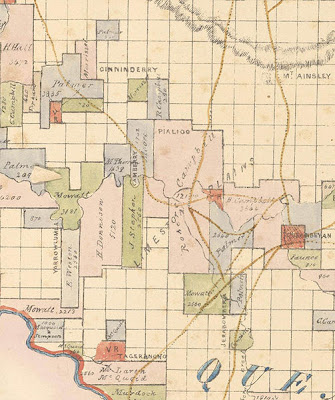 In 1826 Moore applied for an extra 1000 acres (404 hectares) of land extending his holdings on the Limestone Plains. The 'Terror of Argyle' John Tennant (post here) who had been a convict assigned to Moore escaped in 1828 and became Canberra's first bushranger.

Joshua Moore was an absent landowner who never resided on his station and in 1843 during a depression, he sold Canberry to Lieutenant Arthur Jeffreys R.N., son-in-law of Robert Campbell. Jeffreys renamed the property 'Acton' and built the first substantial dwelling known as 'Acton Homestead'. 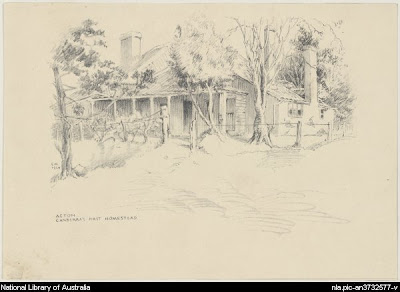 Drawing of Acton Homestead
Photo NLA (here)
Acton Station was the first station resumed by the establishment of the Federal Capital in 1911. A temporary workers camp was established on the site whilst Acton Homestead housed staff coordinating the development of the new National Capital. Charles Scrivener (post here) also occupied the homestead during his survey of the capital site.

Acton homestead was demolished in 1941 to provide a site for the Canberra Hospital (post here). The hospital was demolished and the site of Acton Homestead is now the home of  the National Museum of Australia (pictured below). 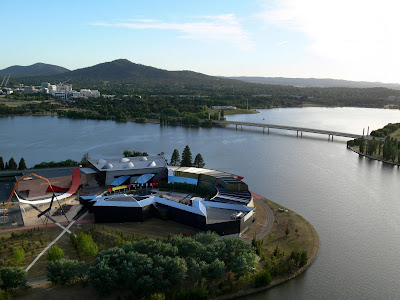