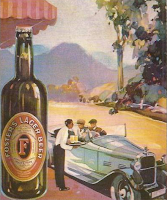 It amazes me in the early day's of Canberra just how much emphasis was placed on alcohol with beer being the point in question. A search of the newspaper archives comes up short when it comes to new years eve.

This comes from the year prohibition was lifted in Canberra. Yes, thanks to King O'Malley our tea-total Minister for home affairs of the day Canberra was once a dry town 1913- 1929. If you wanted a beer you went to Queanbeyan. Simple. Well this clipping is a testament to Canberra's festivities with the train load of empties that left for Sydney after Christmas/ New years 1929... 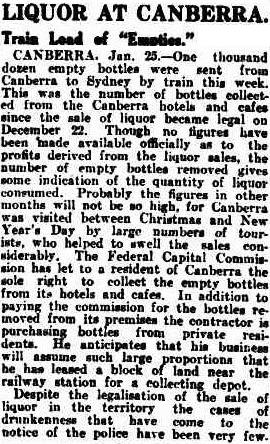 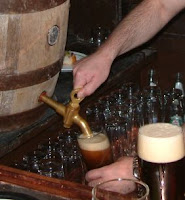 I seldom have a drink, although I've propped a few barstools around Canberra in my time. Apologies for any past indiscretions and yes I do know the cells at the city watch house from many years ago.. After 50 years I must have annoyed a few. I can only imagine today 250 men being arrested for drunkenness though. I didn't realise this was a poem when I started reading it... I like it. 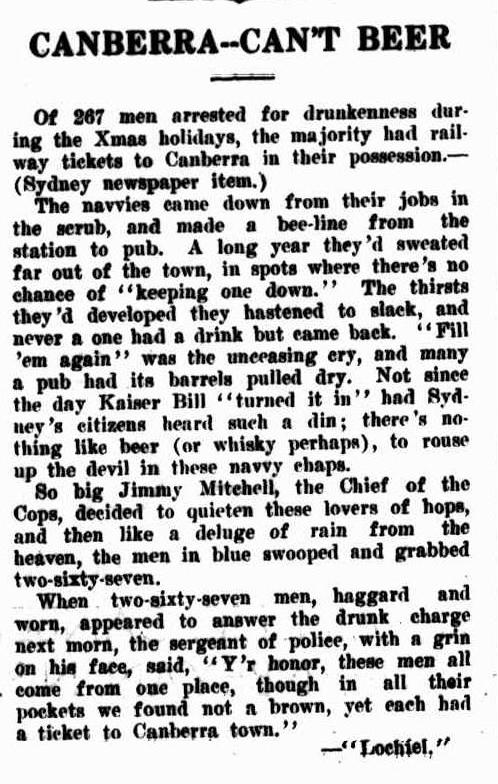 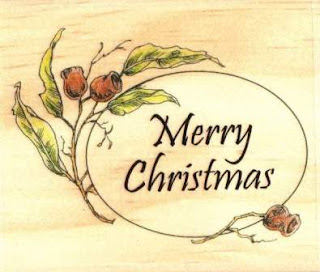 An article celebrating what is described as Canberra's first Christmas. Written by Mabel Just Brennan. I would just like to wish all the readers of my little history blog a wonderful Christmas season. A time of joy, giving and hopefully relaxation as we look forward to 2012 and the countdown to Canberra's centenary. All the best. Cheers Dave...
The Federal Capital Pioneer Magazine - Thursday 16 December 1926 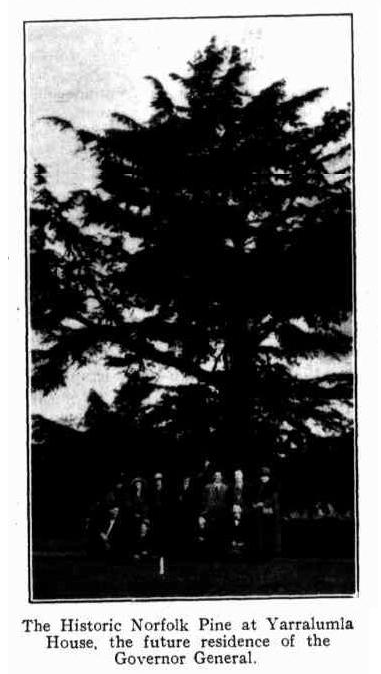 Just a quick one. An amazing pictorial depicting Mount Tennent in southern Canberra. I suggest you click the image to enlarge. 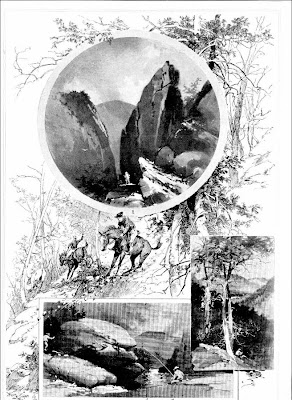 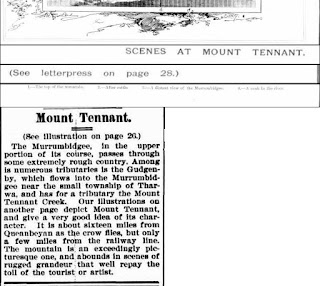 THE CURSE OF CANBERRA

A great one for the Canberra bashing collection. Many newspapers ran an article written by James Edmound, Editor of the Sydney Bulletin. It was 1919 just 6 years after the Canberra naming ceremony and it seemed there was still a lot of criticism of the new capital.
Lots of reports about this issue but this one is fairly representative I think. The article starts with some advocacy for establishing large population centres above the Tropic of Capricorn and apparent staunchness for the White Australia Policy. Apart from pointing out some sort of geographical gripe about Canberra the author gets down to some pretty fine 'Canberra bashing'. I'll leave you to read it. I'm off for a walk around the lake... 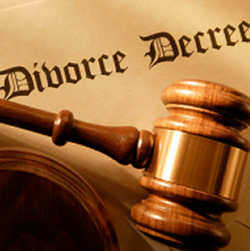 These reports usually don't interest me but in this case I'll make an exception. A clipping from the old days when divorces became really messy...

Sometimes I have a wicked sense of humour and I found this amusing. Apparently divorce was a very public matter. Anyway... Mr Read goes to extreme lengths to catch his philandering wife and lover, employs some spy tactics to read love letters, threatens murder and eventually has the wife's lover pay the court costs... The 50's version of reality TV. Priceless... 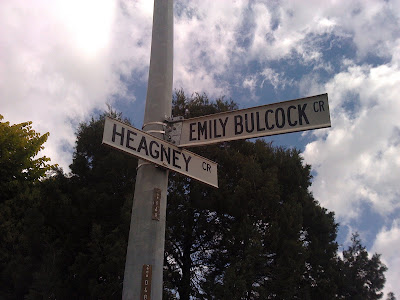 We all know this of course but it is interesting to me that the decision wasn't made until 14 years after the naming of the new city of Canberra. In 1927 it was announced that Canberra's street names would be named after Australian explorers, statesman, pioneers and discoverers. Streets already named would be re-named in accordance with the new policy. Another interesting point is that all these Australians honoured with a street sign must already be dead... 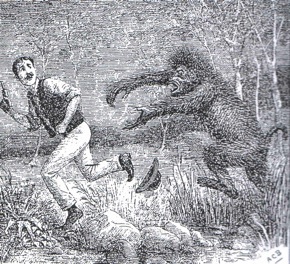 I'm becoming quite surprised at the number of local reports of a hairy man living in the mountains. Called a 'Yahoo' in the day but we probably know them today as Yowies. Bredbo is a small village located on the Monaro Highway between Canberra and Cooma but the area sits parallel to the southernmost region on the ACT.
Anyway I find them interesting and I think I'll start a collection of 'hairy man' clippings...
Queanbeyan Age - Tuesday 24 August 1886 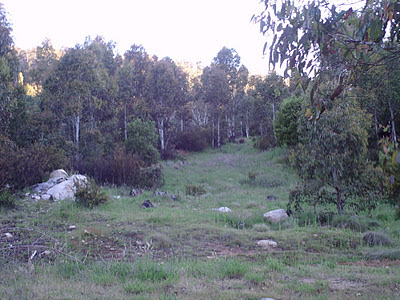 A little hard to read at first this article describes the southern mountainous regions of the ACT in particular the Gudgenby, Nass and Ororral Rivers. A nice description of the old-time hardships of travelling into a region that is today about a half hours drive out of suburban Canberra. A tale of river crossings, horseflesh and pioneers. The suggestion is the Territory's appropriateness as a tourist resort. A lovely description I think... 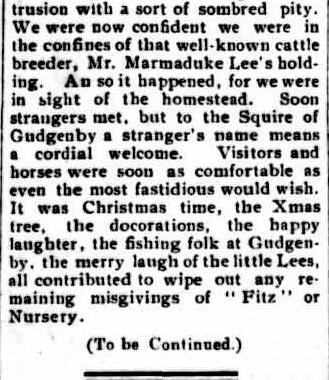 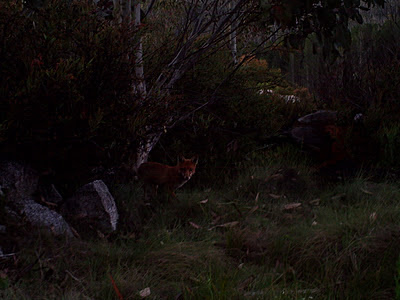 I had an interesting encounter in Namadgi on nightfall yesterday. Stopped to eat and after a whistle got a visit from a young red fox. He/she was fearless and obviously very hungry, It didn't look to be in very good condition. Entry to the area has been signposted as being baited with 1080 poison yet here was this young fox and dogs could be heard barking in the distance as the night wore on.

This fox was determined though and warily stalked around the camp within meters. Around and around looking for some opportunity. Anyway... dogs are my only annoying fear out there at night. I have had experiences with them in the past and 1080 obviously isn't removing that worry. I don't like to feel like I've entered the food chain when I bushwalk.

Yes I am getting soft, and hang me TAMS, it got a couple of sausages. 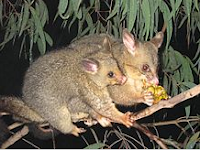 Apart from this being a nice description of Canberra's flowering trees I found it interesting when read in conjunction with another clipping from 13 years later that saw a time requiring the killing of 2000 possums from within a mile of the Canberra city centre. (post here). Now it all makes sense.

I couldn't fathom why 1945 saw the breaking point of a massive possum infestation until I read this article waxing lyrically to the joys of fruit tree blossoms from 50,000 almond, peach and plum trees planted in Canberra a decade before. I know the new city wanted quick growth and colour to enhance its garden city image, and the native wattle was probably a good choice, but as far as possums go it wasn't thought through very well at all. 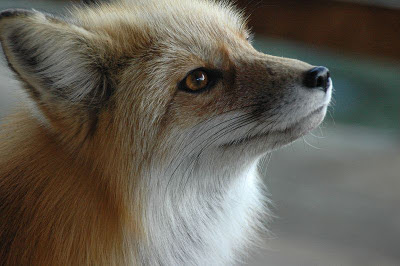 I was reading on a local forum the other day the laments of chicken owners in suburban Canberra backyards of the perils of an unsecured pen and the feral fox. Sounded like Canberra is rife with foxes quite prepared to poach any chicken left unattended and accessible. Problems of a bush capital I suppose.

In my youth I shot a lot of foxes. That might seem harsh but there were a lot of them and a pelt was worth up to 40 dollars. So out of interest a bit of a search revealed that the wily fox has been influencing Canberra society for a while. Remember this is feral pest not Basil Brush. This report from 106 years ago indicates how foxes were dealt with before canberra became the capital...

National Library of Australia
This was pretty much my experience with foxes. Every year same numbers...
The Canberra Times - Tuesday 18 June 1935 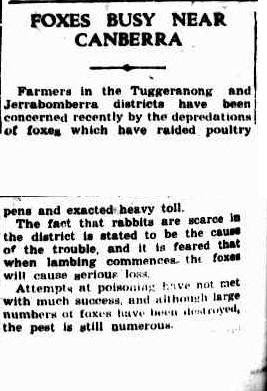 National Library of Australia
I loved this. A Royal connection. A hunt club was formed specifically so the Duke of Gloucester to hunt with hounds. They even imported the hounds...
Cairns Post - Tuesday 23 November 1943

National Library of Australia
The conditions of the pelts were poor in 1948 influencing fox shooters determination I'm sure. I can remember the reason we stopped shooting foxes was that after the anti-fur campaign in the 80's prices dropped to $4 a pelt. Before that the Qeanbeyan buyer used to average pelts at $28...
The Canberra Times - Tuesday 24 August 1948 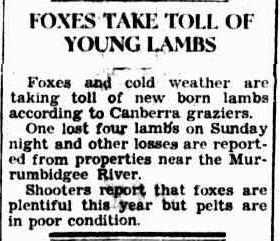 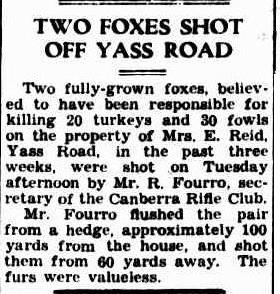 National Library of Australia
Foxes in the hedges of Parliament House, in Haig park and once again poor skin prices saw an increase in numbers...
The Canberra Times - Monday 20 March 1950 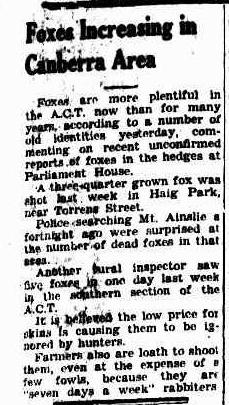 National Library of Australia
Sheep and lamb attacks were on the rise with a suggestion being offered that myxomatosis had reduced the food supply of rabbits and alternatives must be found...
The Canberra Times - Friday 30 July 1954

National Library of Australia
and finally a call for a government bounty on fox scalps...
The Canberra Times - Monday 6 September 1954 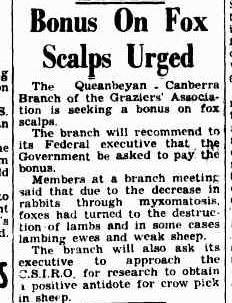 National Library of Australia
There is no fox shooting going on in the ACT that I am aware of but I note areas on Corin Road have been baited with 1080 (Sodium flourocetate) They wouldn't do that in the Canberra Nature Parks I suspect. Well I think that tells a bit of a story on the influences of foxes in the capital and at the end of the day I think people are just going to have to learn to keep their chickens in Canberra very secure. 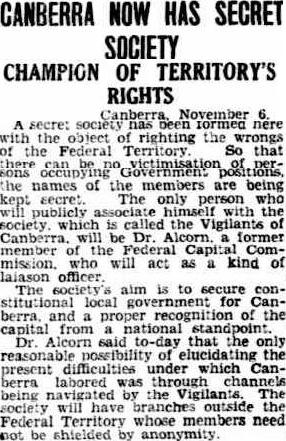 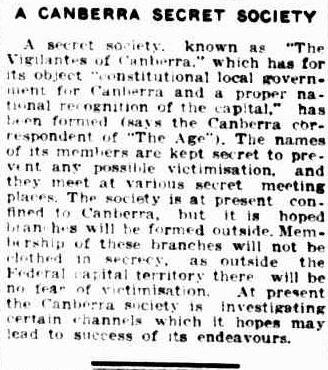 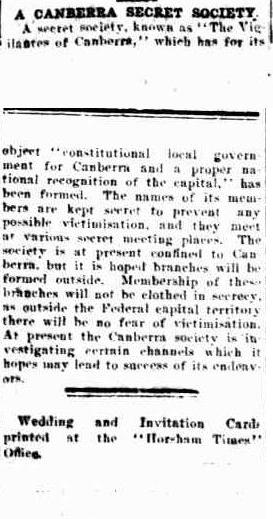 DEATH OF A PIONEER 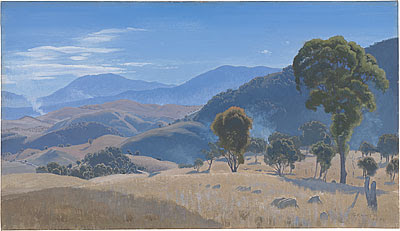 The following is an obituary for a Mr A.A McKeahnie, grazier, magistrate, coroner and captain of the rifle club. As the headline claims, he was the first white child born in Queanbeyan but his holdings included Gudgenby Station and several other estates. His life's tale includes encounters with 'savage' Aboriginals, as opposed to friendly, and bushrangers. Interesting bloke. He was a true pioneer in every sense of the word I think. For more information on Booroomba I have a post here. 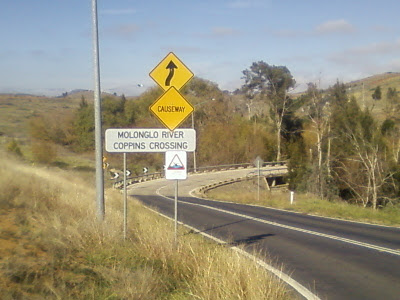 Coppins Crossing is a low level bridge which crosses the Molonglo River. The following may be of interest when next you cross. There isn't a great deal of reports mentioning the crossing but what there is is interesting I think. Originally it seems it was used as a range for artillery in world war 1 by the boys from Duntroon. Interesting also that they halted firing for passing traffic and not the other way around...

National Library of Australia
1930 saw a promise of a new bridge the following year...
The Canberra Times - Tuesday 23 September 1930 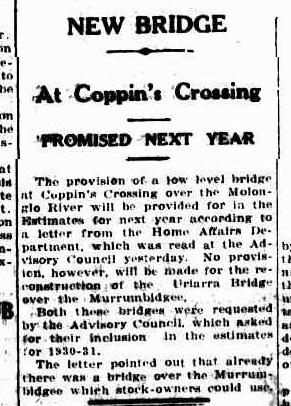 National Library of Australia
And the following year another call is made for a bridge...
The Canberra Times - Tuesday 23 June 1931 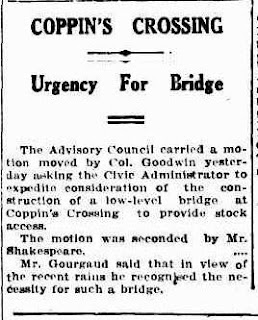 And the new bridge was constructed a year later...

National Library of Australia
And livestock no longer needed to be moved through the city centre... imagine that.