JOHN TENNANT - The "Terror of Argyle"

Tennant had been a convict assigned to Canberry, a property in the present day inner north Canberra. Mount Tennent, behind Tharwa, is named after the bushranger (note the different spelling).

Tennant was born in Belfast, Ireland. He was 29 years old when sentenced to transportation to Australia for life in 1823. In 1824 he was assigned to Joshua John Moore (bio here)  and sent with two other men, James Clarke and John McLaughlin, to establish Moore's property Canberry (present day Canberra), the first European habitation on the Limestone Plains.

In 1828 Tennant and another man, John Ricks, absconded and took to the bush. He then hid out on Mount Tennant and according to John Gale (here)

"Where Tennant stored his booty... was never discovered, not withstanding frequent and ... exhaustive serches to this end. The mountain (here)  had numerous caves and mazes well adapted... many never explored."

After committing a number of robberies in the region,  the "Terror of Argyle",  is captured by James Ainslie (story here) and two others near the Murrumbidgee River in Tuggeranong in 1828.
His fate, the notorious penal colony of Norfolk Island (info) for 7 years.

The Colonial Secretary warned the Commandant of Norfolk Island:

"The six men named…long the terror of Argyle and the surrounding country, are now forwarded and I am directed to point out to you for your information their extreme desperation in order that you may be aware of their characters."

Tennant served his term arriving back in Sydney and died a year later in August 1837. 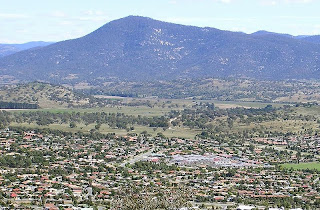