Every time I drive past the new Australian National Museum I am reminded of the place of my birth, the (now demolished) Royal Canberra hospital. The Old Canberra Hospital was firmly and warmly placed in the memories and affections of Canberra people. Its beautiful, central position on a peninsular on Lake Burley Griffin below Black Mountain had been marked by Walter Burley Griffin on his original plan for Canberra.

1912 - The early years - In response to breakouts of diphtheria, measles and chickenpox amongst workers, Dr. W. Perrin Norris (medical adviser to the Commonwealth at the time) recommended that a Government hospital be built on a 10 acre site at Acton. There were few other public buildings in Canberra.  The building in Balmain Crescent Acton is the site of the first public hospital in Canberra.

1940 - August - the foundations for the "Acton Peninsula Hospital" began. 1942 - the United States Armed Forces used the new Canberra Hospital to treat thier wounded personnel. 1943 - January - the US Army relinquished the hospital (too far to transport wounded). 1943 - 20 February - The new hospital was officially opened for civilian use by the Governor General, Lord Gowrie (1872 - 1955)(bio here).

1946 - Howard Florey (Nobel Prize bio here) administered 25,000 Oxford units of penicillin to a five month old infant with pneumonia who became one of the youngest children ever treated with the new drug. 1948 - Over 700 babies were delivered at the hospital. 1950–1951 - A Poliomyelitis epidemic grips Canberra.

1954 - A memorial fountain was built close to the original site of Acton Homestead at the instigation of the Deputy Matron Miss Sylvia Curley (1898 - 1999) (bio here), using some stones saved from the demolished homestead. 1959 - December - Plans to construct new main buildings were approved. 1954 – 1961 - Population of Canberra almost doubles. 1960 - Contract for new buildings let for additions to the Canberra Community Hospital. 1963 - I was born!  1964 - 17 April - A new nurses' residence, was opened by Dame Pattie Menzies (1899-1995) (bio here) called Sylvia Curley House.

Dr. Bob Brown, Leader of the Australian Greens (bio here) was a resident at the Royal Canberra Hospital and stated : 'that one of his early and formative experiences in civil disobedience was watching how the senior medical staff at RCH consistently found healthy young men who didn't wish to fight, completely unfit on medical grounds for conscription into the Australian Army for the Vietnam War.'

1997 - 13 July - The Royal Canberra Hospital building is imploded. The public were encouraged by the ACT Government to watch the controlled demolition of the hospital. Spectators lined the foreshores of Lake Burley Griffin to watch the historic destruction in  locations that nobody considered unsafe or inappropriate.

The implosion of the Royal Canberra Hospital was a terrible failure. The Explosion projected debris towards spectators located 500 metres away.  A twelve year old girl, Katie Bender (inquest info here), was killed instantly, and nine other people were injured. Large fragments of masonry and metal were found 650 metres from the demolition site.


The Woden Valley Hospital in the south of Canberra is now known as The Royal Canberra Hospital. 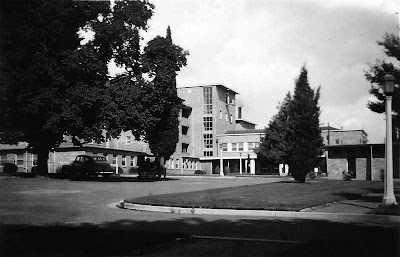