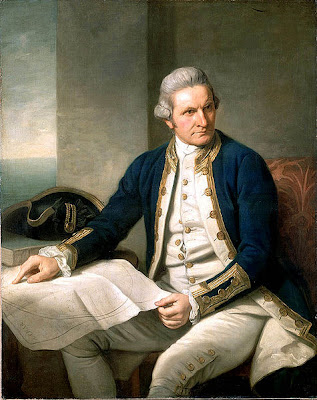 Captain James Cook
Wikipedia photo (here)
As was usual with colonial expansion, in 1822 Traditional Owners were quickly displaced when Alexander Berry took up the land in the Shoalhaven area. They were (moved) to the 'Wreck Bay Aboriginal Reserve'. Smallpox and syphilis soon significantly reduced the local Aboriginal population. By 1932 only 50 Aboriginals were recorded as living at the 'Reserve' on Wreck Bay. 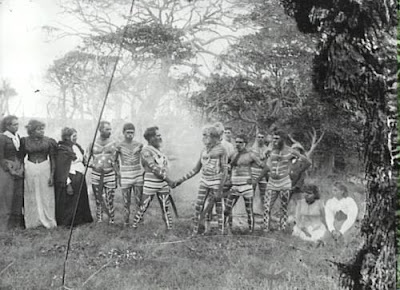 King Mickey of Kiama with King Billy of the Shoalhaven.
Kiama local history weblog (here)
In the 1860's the ill-Fated Cape St George Lighthouse was raised with concrete blocks made on site (link here). Unfortunately the Lighthouse was doomed from its beginning. Official bungling, lack of supervision and poor location (possibly the totally wrong location) hampered the visibility of the light to ships on the northern approach to Jervis Bay and failed to warn of offshore reefs. The Lighthouse operated less than 40 years at which time it was unceremoniously destroyed. In 1899 The Point Perpendicular (Capt. Cook's 'Long Nose') Lighthouse was established (in an appropriate place this time)(here). 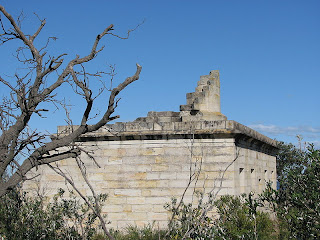 What remains of the Cape St George Lighthouse.
Wikipedia image (here)
The Federal Government purchased the area from the New South Wales Government in 1915 to allow the new Federal Capital of Australia access to a seaport. It was however (and remains) administered as if it were a part of the Australian Capital Territory. 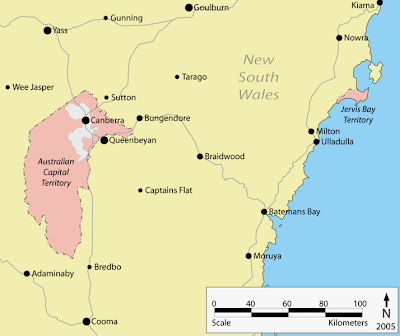 Map of the Federal Territories.
Wikipedia image (here)
This was the stage for the Jervis Bay Territory to become the 'cradle' of our present day Royal Australian Navy. In 1911 Captain's Point Jervis Bay Territory on the south coast of New South Wales was chosen by Federal Parliament as the site for the Royal Australian Naval College. The Federal Parliament decision for Jervis Bay was based on the locations proximity to the new Federal Capital Territory and the fact that it is a natural safe harbour. 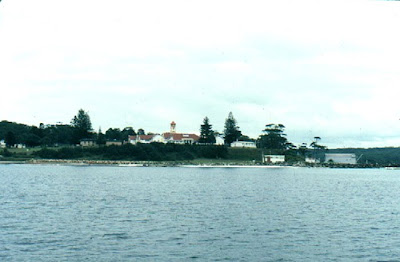 HMAS Creswell from the sea.
Wikipedia image (here)
By 1915 the main college buildings were complete. The college at Captain's Point was renamed HMAS Creswell after Sir William Rooke Creswell (1852- 1933)(bio here). Creswell was a colonial naval officer who wanted to see an independent Australian Navy and he was instrumental in achieving just that. The navel college provides basic and leadership training to officers in the Royal Australian Navy.
Creswell is on the Australian Heritage Commission's National Estate register as of 1981. 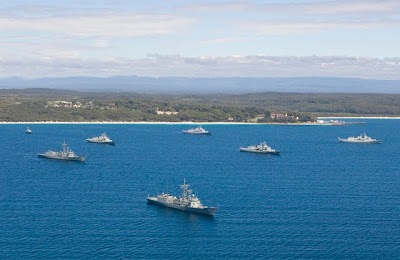 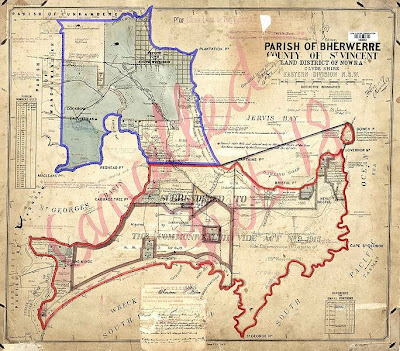 Parish map before resumption by the Federal Parliament.
Photo Wikimedia commons (here)
There are three villages in the Jervis Bay Territory. Jervis Bay Village (pop. 250), Greenpatch (pop. 30) and Wreck Bay Village (pop. 215). Over 90% of the territory is legally recognised as Aboriginal land with a community based at Wreck Bay in the Booderee National Park (link here). There are three small lakes within the territory: Lake Windermere (31 hectares/76 acres), Lake Mckenzie (7 hectares/17 acres), and Blacks Waterhole (1.4 hectares/3 acres).

Finally... in the late 1960s a nuclear power plant was planned...
the project did not proceed.