Actually found this tale quite disturbing. 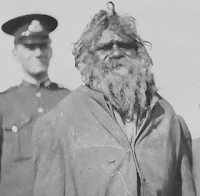 I note that most of the articles from the 1880's on were a bit obsessed with what they perceived as a 'doomed' Aboriginal Race.  My impression from reading these sort of articles leave me with the impression of blatant and condescending racial arrogance.

There seems always to be a letter to the editor somewhere at the end of all these type of discussions in a strange sort of way lamenting for what had happened to these people and in some cases accepting responsibility. All this though always seemed tempered by this ingrained 'scientific' belief in the eventual eradication of the Aboriginal race being inevitable.

Canberra's examples are 'Queen' Nellie Hamilton and of course 'King' Billy (Jimmy Clements) who gained National notoriety. It might also be noted that Jimmy was Wiraduri (west of Canberra) not a member of the Ngambri Canberra People.

Jimmy Clements as far as I could work out apparently walked from Tumut (I am presuming over the Brindabellas) (about 100 K) to Canberra in order to meet the Duke and Duchess of York at the opening of Parliament House in 1927. Barefoot and scraggly he was asked to move on by a policeman and protested that "this is the land of his ancestors."

A fair example of twentieth century attitude is this tale around the time of Jimmy's death which culminated with calls for the erection of a monument in Canberra. We start with a Federal Member making a joke in Parliament at Billy's expense... 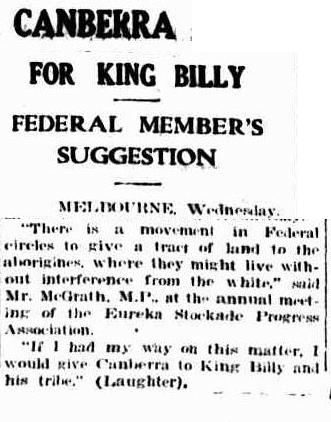 Within months Jimmy was dead and reported as;
"The last of his tribe that roamed the plains and hills long before the Federal capital was dreamed of..." 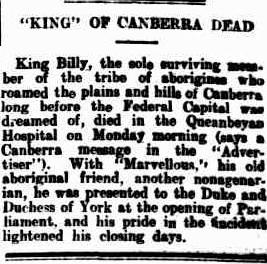 National Library of Australia
Several papers ran the story nationally of Jimmy's death The Register (Adelaide) -  Brisbane Courier - The Northern Standard (Darwin) but all printed the same text. (This was the most legible)
The next month a suggestion reached the National stage. As I mentioned before this doomed race attitude and a little 'lamenting' of the loss seemed to spur self pacification with the honour of a monument...
The Sydney Morning Herald - Tuesday 27 September 1927 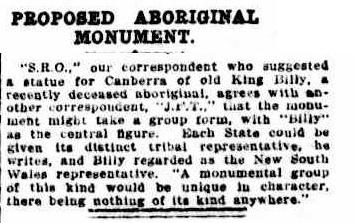 National Library of Australia
I think this is fairly representative of the contemporary attitude and belief...
The Sydney Morning Herald - Wednesday 21 September 1927 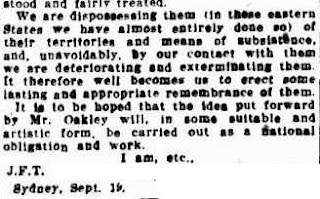 National Library of Australia
For what it's worth as the only representative of Aboriginal People at our Parliament's opening I think it would be fitting to erect a statue to Jimmy Clements somewhere in the Parliamentary Triangle. Not as a memorial to an extinguished race but as a reminder that "This is the land of his ancestors."
-
- July 03, 2011