In a nutshell... The Canberra region was one of the first agricultural regions settled after the mountains had been crossed southward of Sydney. Canberra was discovered and settled in the same year 1823 (some say 22). Large acreages of land were taken up by the settlers, holdings that also had access to unlimited areas around their official title.

These properties were predominantly sheep runs and at a time with no fencing each mob of sheep had to be permanently kept and maintained by shepherds. How many mobs of sheep to make up 30 or 40 thousand head of sheep? Many men were required to run these large agricultural concerns. Lanyon alone over a period of twenty years had up to 60 convicts at a time. J.J Moore of Canberry, Klensendorlffe, James Wright and others all built their empires with the freely available convict labour. Canberry's history involved lots of convicts.

Convicts guarded the flocks against dingo attack. Convicts planted the crops. Convicts gathered stone, built buildings and roads, and convicts were often flogged for failing in even the smallest discretion. Some of the landholders were notoriously cruel.

This 'free labour' ability to develop lucrative and prosperous agricultural concerns ended when convict transportation was finally officially abolished on 1 October 1850. A 27 year convict 'hey day'. It is interesting to note that many early landowners went bankrupt shortly after that...

The Convicts of the (now) Australian Capital Territory were the backbone of agricultural expansion of the new Colony. This page aims to be a collection of information and links to knowledge about the ACT's forgotten pioneers. 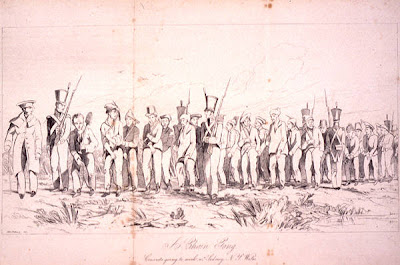 Convicts were assigned to wealthy free settlers attracted here by promises of free land the the labor to work it. Free convict labour pleased landowners who without it probably couldn’t have afforded to meet the intrusive conditions specified in their Government grants.

This was to be the case with the propertys of the County Murray e.g. Duntroon (here),  Tuggeranong (here), Lanyon (here), Klensendorlffes (here), Springbank (here) and others. Under the assignment system, many convicts were assigned to individual settlers to act as servants, shepherds, hut keepers, or workers in some other capacity. Their sentences 7 years, 14 years, and life with many for trivial crimes committed in Britain.

The vast plains of the valleys in today's ACT were perfect conditions for livestock. Flocks of sheep soon developed on rich and fertile, well watered plains.There was of course no fencing at the time and as such old practices were employed to manage stock. Shepherds and their flocks of sheep. This was labor intensive and greatly assisted by the free labor provided by the 'assigned servant' (convict). Convicts cleared land, built roads and stone walls (here) as well as establish buildings on properties.

THE FEEDING OF CONVICTS – GOVERNMENT REGULATIONS (1835)
Weekly ration per convict

2 x frocks or jackets
3 x pairs of strong shoes
1 x cap or hat
and constantly supplied' with at least one good blanket and palliasse (or wool mattress).

Wright’s much-flogged Irish convict shepherds would tend sheep and fend off dingoes in cold mountain valleys beyond Michelago. They would eat vegetables and grind flour from wheat grown by unpaid convict labour on what Wright called ‘the farm’, on Lanyon’s fertile flats. Wright aimed to make his wide-flung pastoral empire as self-sufficient as possible, by creating a dairying and agricultural hub at Lanyon.

Lanyon has a convict-built courtyard as well as its 'old' kitchen’ with bell tower and the big barn nearby. The bell (around 1838) was cursed by weary convicts stirred from sleep to labour in the cold and dark. The barn on the creek provided winter shelter for Wright’s more valuable livestock, as well as somewhere to store wheat and probably other farm produce like potatoes and turnips. It was never the convict ‘gaol’ of later legend,

The cessation of assigned convict labour in 1842 coincided with acute economic depression and Wright's empire collapsed. Transportation was eventually abolished in 1868. 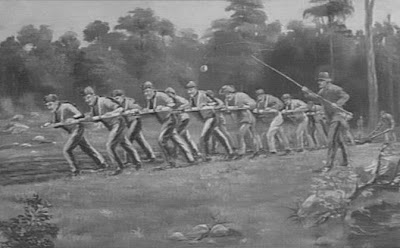 A convict team ploughing a farm, while a guard looks on.
Photo Wikimedia Commons (here)

In 1828 there were some 14 convicts at Palmerville (present day Ginninderra in Belconnen). The 1841 census showed about 68 people – 47 males and 21 females; 15 were convicts and 6 ticket-of-leave holders.


Portraits of Canberra's convicts is a series of photos I took of the displays in the convict built barn at Lanyon Homestead interspersed with convict paintings and drawings. The physical descriptions of the convicts from the individual convict's records give us a glimpse of not only crime, sentance and age but also how they looked, what tattoos and scars they had and in some cases their mannerisms such as how they spoke.

The instrumental soundtrack the 'Fairytale Waltz' is supplied by Marc Gunn a Celtic American Musician and Podcaster, singer songwriter/instrumentalist who also has an album available for free download (here).