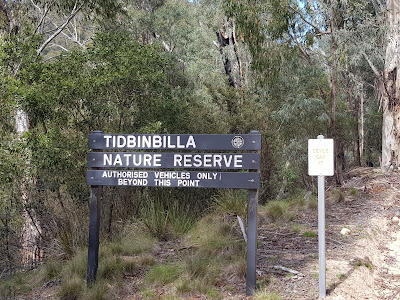 Some years ago I had placed an audio recorder out at a place called Devil's Gap which is located in between Gibraltar Creek and Tidbinbilla and accessible by foot from the Tidbinbilla Ring Road or via the fire trail which starts just up from the woods reserve campground located on Corin Road.
It was mid winter at the time and I was attempting to record the sound of a lyrebird display. It is my habit to put out a sony voice recorder which will run for 4 days with high powered lithium batteries on super high quality. The 8gb memory card holds 16 x 8 hour files which matches the battery life.

I did manage to capture a lovely recording which had the claim to fame of being played on ABC Radio Canberra. I also captured some unidentified noises which had left me wondering for a long time as to what had made the noises.

I would describe the sounds captured as being like a very heavy man running past the recorder several times and at times striking the recorder. This was accompanied by the sound of tree branches/bushes being snapped in what sounded like an aggressive action and a separate approach by a set of walking sounds, stopping to rummage the granite rock that was placed on the plastic weather sheild that protected the recorder.

All this happened in the small hours of the morning in fairly dense scrub at an hour that I wouldn't expect bushwalkers let alone cross country runners.. I returned there 6 days ago and again set a recorder.. I picked it up today. Here is a short video of the set up..

And another of my trip to collect today..