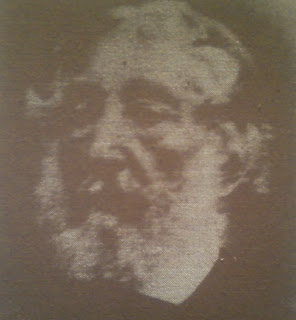 Just a mention of a memory. That of a tree used for flogging convicts when Canberra was known as the Limestone Plains. 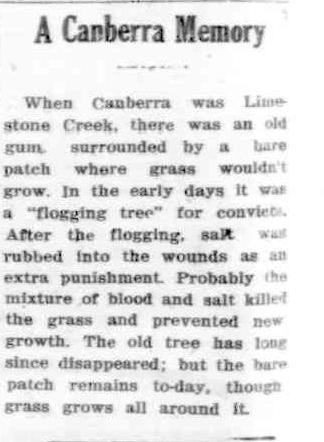 I have cut the following from an older post on Convict Floggings at the time of settlement in the region. It was transcribed from the Convict Barn display at Lanyon which unfortunately was gutted by a vandals fire a few years ago. It is quite an example of the severity of floggings dished out locally...

One convict, Phillip Lee who was transported to New South Wales for life for burglary at the age of 17, had several run-ins with Wright and the Magistrate's lash. It is a sad record.14 December 1838Wright - Yesterday morning I had reason to check this man and with great insolence of manner he told me he had behaved well but would not do so any longer. I might take him to court and do what I please with him. Another servant tried to strike me. I called on the prisoner to assist me which he would not do but kept aloof some four or five yards distant. The prisoner has nothing to say in his defence and says he is sorry for what has happened. GUILTY - disorderly conduct - 25 lashes.25 January 1839Wright - The prisoner is extremely idle and shams sick to avoid work. I have had him examined by Dr. Hayley who said he was quite capable of performing his work the same as any other servant on the establishment. Late Monday morning the prisoner did not come to work with the other men. I went and obliged him to come. I afterwards found he was not at work and I went quietly to his hut and found him joking with the shepherd and smoking his pipe. On being questioned why he was not at work he replied he was just coming. GUILTY - disobedience - 50 lashes.29 January 1839Wright - On the 25th instant he was tried before this Bench and sentenced to punishment. On his return to Lanyon I desired to see his back. He refused saying he'd see me damned before he'd show it to me nor should I get any good of him. He was also exceedingly insolent and abusive in his manner and language.GUILTY - disobedience - 25 lashes - Insolence - 75 lashesIn just on four days Phillip Lee received 150 lashes. The end result of this battle of wills was that despite his punishments Lee could not be tamed by Wright and soon after, as a last resort, was returned to the Government. He died in Parramatta hospital in 1840 aged just 30.

The Goulburn Magistrate, Macalister, was so concerned about the matter that he wrote to the Colonial Secretary in 1838 about the ineffectiveness of the government issue lash.

"They are made exceedingly careless... The cord may be sufficiently heavy, but of too soft a twist; although it bruises, bleeding but seldom is caused; consequently the offender escapes that acute pain and smarting to the extent so desirable should be experienced under the lash. I would suggest the scourging cord be of a much harder twist".

Anyway just the mention of a Canberra memory... Actually quite plausible...

Email ThisBlogThis!Share to TwitterShare to FacebookShare to Pinterest
Labels: convicts