I met an amazing bloke who has rediscovered a forgotten road... 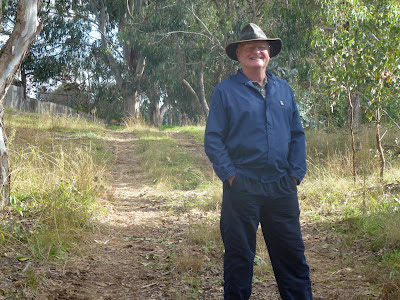 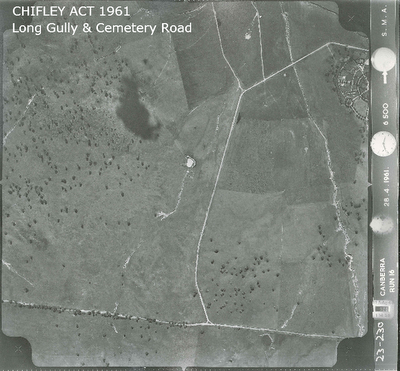 Using present-day landmarks, it left the Valley through Section 43 of Chifley (that contains the only section of the original gravel road in existence today). It then went up Waldock St Chifley, across the Parkway, and follows the route of the walkway from Badimara St Waramanga, through Stirling (through the pine trees at the front of the Weston Labor Club) to the corner of Streeton Drive and Darwinia Terrace. 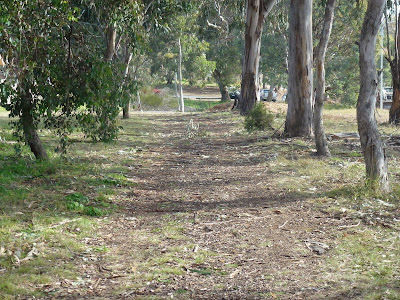 At that point it had an intersection with the old Kambah Road, which headed south, while Long Gully Road turned north through Rivett and Holder. A bitumen section of Long Gully Road can still be seen north of the bus stop on Dixon Drive Holder, where Long Gully Road crossed a tributary of Weston Creek via an old bridge.
The remaining 200 metre section of gravel road in Chifley is now covered by vegetation. However, its route through very old gum trees is clear. There were 12 old gum trees bordering that section of Long Gully Road, as can be clearly seen in an aerial photo taken before development. Now there are many more, some growing in the actual road itself. Those 12 old trees were left untouched when the native forest was cleared for farming, and Long Gully Road was constructed, so they are very old indeed. 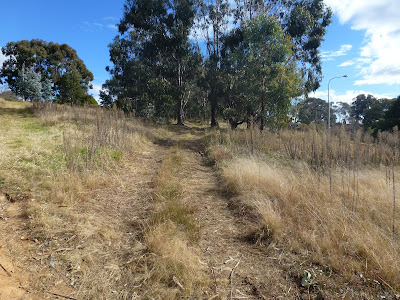 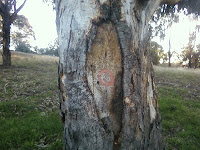 Not far from that stand of trees – still in Section 43 – there is another old gum tree that has had its bark removed to make a coolamon for an aboriginal woman. Look for that tree at the north end of Whitelaw St Pearce (where Dave Reid lived as a kid – thanks Dave).
The remains of Long Gully Road are now easy to find because of the new cycle-path through Section 43. First, funds from the cycle-path project have paid for a seat and an interpretive sign to be placed between the cycle-path and Long Gully Road, at the top of the hill. That site will be part of a Southside Heritage Trail. 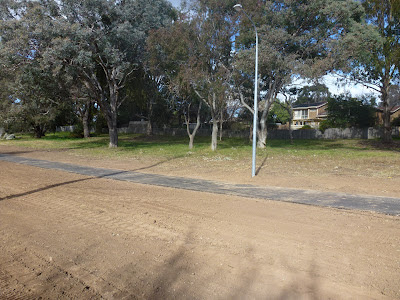 Second, the cycle-path construction workers had to find a way from the Threlfall St entrance to Section 43 to the other side. An observant truck driver found a ready-made route through the trees. He had discovered old Long Gully Road! So now there are wheel tracks on the old road for the first time in 50 years.  When, at some time later, the driver was told, he was worried. He was quite relieved when he was told “It’s a road, mate. Why not use it? It’ll probably be the last time anyone drives a vehicle on it.” 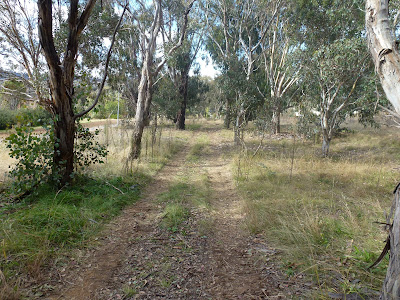 The other main road in the Valley when it was farmed was The Cemetery Road. That road went from an intersection with Long Gully Road in Section 43, along lower Gledden St Chifley (house numbers 2 -15), across # 9 Charteris St, down the hill (past a large dam) to Woden Plaza, across to the cemetery, then north along Kent St to Cotter Road. 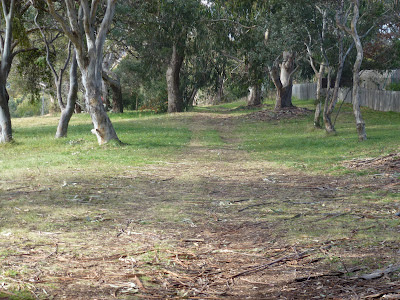 The Cemetery Road was the main access road for such properties as Melrose (the Maguires), Yamba (the Eddisons) and Yarra Glen (the Campbells). Robert Campbell arguably used it more than most as his father George also had a property at Arawang. Robert lived at Arawang for a time so would frequently travel (and drive sheep) along The Cemetery Road, Long Gully Road and Kambah Road. 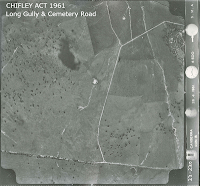 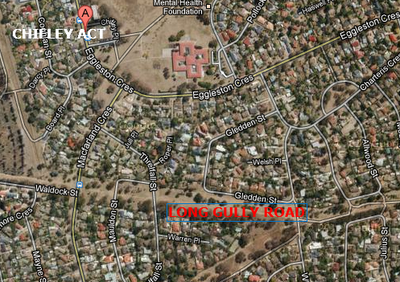 Thank you Neville. In closing I might add the road even got a mention in the papers of the day.... 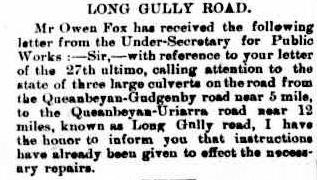 Email ThisBlogThis!Share to TwitterShare to FacebookShare to Pinterest
Labels: roads