Update 4/6/12
From the ACT Government:
The ACT Government has today called for information from the public after at least 30 sections of the predator-proof fence at Mulligans Flat Sanctuary were cut open last night. An inspection is currently taking place to determine the full extent of damage and repair works are under way...
Full Media Release 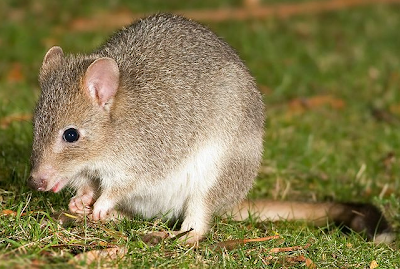 Really exciting environmental work is happening at Mulligan's Flat enclosed nature reserve in Canberra's north. The ACT Government is reintroducing the Eastern bettong to the territory where it has been locally extinct for over a century.

Last year a number of bettongs were re-introduced into an enclosure in Tidbinbilla Nature Reserve to form a breeding colony and etablish a backup colony for the next stage of the project. In recent days 24 more bettongs were brought from Tasmania (The animals last wild refuge) with some going to Tidbinbilla and the rest taken to the Mulligan's Flat box-gum woodlands sanctuary in what is described as the first wild-to-wild trans-location of bettongs.

Mulligans Flat reserve is a reserve of over 400 hectares secure from feral animals. The reason Bettongs became locally extinct was because of predation by the European fox, cat and wild dog. This predation would continue in our current circumstance if not for a fox, dog, cat proof enclosure...

From tamsactgov You Tube channel...

"Eastern bettongs from Tasmania are being introduced to the Mulligans Flat Woodland Sanctuary in the ACT, as part of a joint project involving local, interstate and international partners. The translocation of bettongs is part of a woodlands restoration project at Mulligans Flat and Goorooyarroo nature reserves involving a partnership between the ACT Government, Australian National University's Fenner School of Environment and Society, CSIRO and James Hutton Institute in Scotland and is supported by the Mulligans Flat Woodland Sanctuary Board of Management."

An article from Queensland when Bettongs were apparently numerous...