I have been waiting patiently for the ACT government to re-open the rain affected roads in the south of the Territory. Two weeks ago I put a trail-camera (video & photos) out in Namadgi National Park. This was to be a test for the camera and I planned on leaving it there for a few days.

Alas the heavens opened and the mountains closed down. So the camera has been out there for two weeks so far and has been recording 2 photographs when triggered (heat and movement) followed by 10 seconds of video... the camera resets each time after 1 minute. So waiting... waiting... 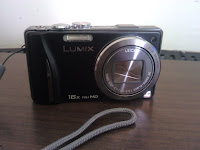 In the meantime I have received delivery of a new camera to replace the piece of junk I have been using. I decided against a traditional camcorder because I wanted something highly portable. It was inconvenient to always carry a camcorder especially when I'm walking.

Zoom and macro were another want and the Lumix provides both. Apparently the camera has all the wonders that a photographer could want in settings but the thing I found attractive was the 'Intelligent auto' mode which seems to handle all those considerations well enough for me.

I went up the hill today and took some test shots and to get a feel for the camera. Its very different to using a camcorder I found and stabilizing myself will be something I'll need to master. Most of the shake in the following video is user inexperience.

Anyway... I'm interested in seeing what the trailcam captured over the past few weeks. This post is really to say I'll post the results (if any) here as soon as the road opens and I can get out there. The camera will run for three months but lets hope the roads are open before then. I'm already stir crazy...