This is the second reference I have found to a novel idea to eradicate Dingos from the Canberra region (the first Fishing for dingos).

Dingos were an abundant and ever present threat to livestock from the earliest times of settlement in the region. One report from the 1840's from Lanyon reported one settlers burial as requiring large stones placed on top of the coffin to prevent the dogs digging up the grave. Convict shepherds basicly lived out with the flocks in their care and punishments were severe for loss of stock to dingo attack. The problem persisted for nearly the next century.

I don't know if this was a serious suggestion or just a canny way of getting their point across about the seriousness of the situation. The previous article suggested that the Minister allocated a budget for a local  eradication program after receiving the suggestion. Regardless I think the idea was entertaining... 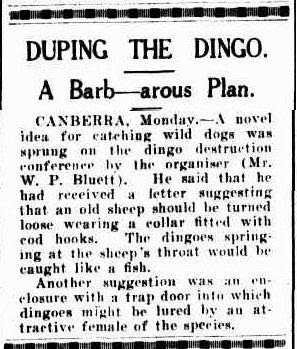