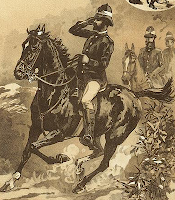 This is the second reference I have found to early calls for a police presence on the Limestone Plains and Manaroo (Monaro). The first was a call for mounted police and this clipping dated 1838 again calls for a solution to the murder, sly-grog selling and horse and cattle theft common in the area.

Bushrangers remained the common lament and it was decided that the 'new' town of Goulburn be equipped with a goal and a courthouse to remove the necessity of felons being transported to Sydney for trial.

The area really was a wild frontier by all accounts...