Just collecting my thoughts and sorting information (primarily news clippings) into the one place for a project I am planning... 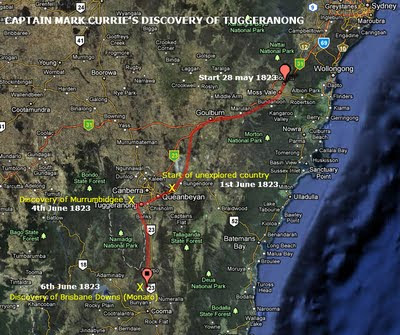 Mid winter in 1823 Captain Mark Currie accompanied by Major John Evans and the bushman Joseph Wild embarked on a journey of exploration south from Bong Bong (Roughly Bowral) entering the so far unexplored country from the junction of the Queanbeyan and Molonglo Rivers and travelling to the east of the previously discovered Limestone Plains (Canberra City area) discovered a vast rich plain that he named 'Isabella's Plain' after the governor of the day Thomas Brisbane's daughter.

The project plans to follow Curries route from the 1st June 1823 (by that date unexplored) crossing of the Queanbeyan River and (by modern means) follow his route through the southern part of today's Australian Capital Territory to his discovery of the Murrumbidgee River. As I have discovered this was historically a point of contention.

The discovery of the Limestone Plains (Canberra) was only shortly before by a Dr. Charles Throsby who ventured down the Molonglo but whether he reached its confluence with the Murrumbidgee is seemingly unknown. I suspect he turned back before meeting the Murrumbidgee, my reasons, it was his holy grail (2nd expedition) and I feel a discovery would have been more widely celebrated and documented. 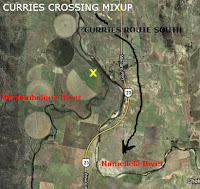 At this point as he looked out across the plains he decided in true Australian explorer fashion to curry favour with the governor and christened the Aboriginal Monaro of the Ngarigu People 'Brisbane Downs.'

Personally my family took up land a few kilometres south and called it 'Reid's Flat' (present day Bunyan). That is where the project ends as the party, running low on supplies, returned to Bong Bong with the news of Curries discovery of Isabella's Plain, the Murrumbidgee and the expanse of the Monaro discovery. 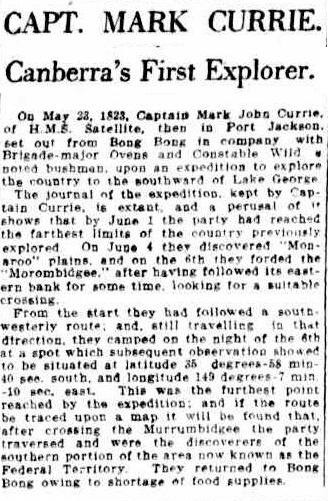 National Library of Australia
-
A brief mention of the 'project'. My recent interests have involved the use of video and I find it to be a pleasurable and interesting pastime combined with my interests. I have been practising with techniques, editing programs, YouTube and such until recently with a very old 4 mega pixel camera.

As I intend to produce (at least some) accessible video based material on Canberra's history and heritage (and its fun) I have purchased a camera with HD resolution to improve the watch-ability of the amateur stuff I create. Cheers