CANBERRA HAS ITS RABBITS 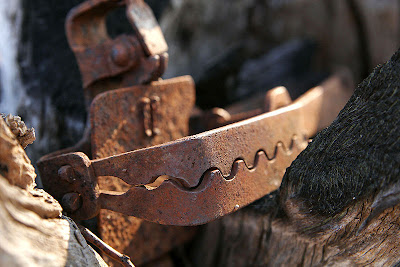 A few Rabbits on my walk this morning, nothing special in that but I'm not exactly beating them off my front lawn. As a teenager my friends and I spent many hours ferreting and trapping behind the southern suburbs along the Murrumbidgee (thank you Mr Champion) and they were always plentiful. The humble bunny was a welcome distraction to 1970's Canberra teenage boredom.

Rabbits were however a huge problem for Canberra in the 1950's... 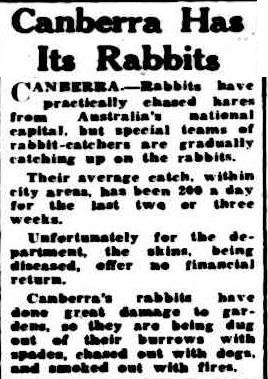 National Library of Australia
The war on the rabbit had begun...
The Sunday Herald - Sunday 23 January 1949

National Library of Australia
Not related to Canberra directly but an international market developed for rabbit meat. We were sending the bunnies back to Mother England. Smart thinking with such an abundant pest yet I imagine the ACT would not have had the refrigerated infrastructure perhaps to participate...
The Argus - Wednesday 2 August 1950 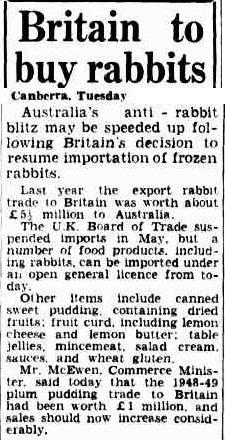 National Library of Australia
1950 saw the deliberate introduction of Myxomatosis known colloquially as 'myxo' to try and stem the bunny population in Australia. Myxomatosis is a disease caused by the Myxoma virus which affects (and kills) rabbits. By 1953 though signs of resistance to the disease were being shown in Canberra. Apparently we had 'super' rabbits...
The Canberra Times - Monday 2 November 1953

National Library of Australia
I can attest to still getting rabbits with myxo in the 70's but they were few and far between. Its been a very long time since I hunted a rabbit though my niece has 3 ferrets as pets. It is unlikely she would let me put them down a hole I think...
-
- August 04, 2011