THE TERROR OF ARGYLE'S TREASURE

What if there was a Canberra mystery to be solved with historical artefacts worth today up to $2,000,000 as the prize? Whether you believe in the legend of the bushranger's hoard existing today or not I still think it's a bit of fun...

This is a tale of early bushrangers, hidden treasure and a rural ACT mountain. The story has definitely been embellished and distorted by the 'chinese whispers' of time but something deep down, to me at least, suggests a ring of truth behind events seen through different eyes and perspectives.
Born in Belfast Ireland John Tennant aged 29 was transported to the penal colony of New South Wales for life arriving in 1824. He was assigned to Joshua Moore of Canberry station (Canberra's first settler) before absconding and becoming an early bushranger in County Murray and earned the description of 'The Terror of Argyle'?

I actually don't understand why Tennant was called the 'Terror of Argyle' when he was from County Murray not County Argyle which is around Goulburn. He should really have been known as the 'Terror of Murray'. But I digress...
The conclusion to the following articles poses a few questions... Was Tennant convicted and hanged or was he convicted and sentenced to 7 years on notorious Norfolk Island? Were his ill-gotten gains recovered and if not what happened to them? Are they still waiting to be found? At least one published pioneer thought so.
The first article appears to come from the testimony of James Ainslie...
Federal Capital Pioneer - Friday 25 June 1926 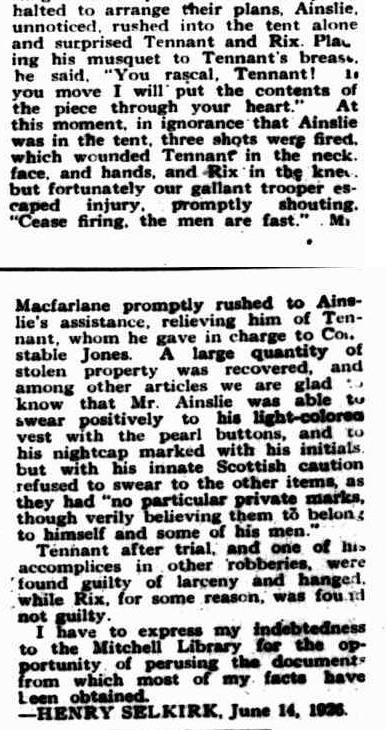 (From Incidents in the life of Trooper Ainslie)
National Library of Australia
That appears to be the 'official' story and we know at this point that it is suggested by Ainslie that Tennant had stolen and was in possession of 4 Holey dollars (20 shillings), three Spanish dollars and two Rupees. No mention is made of the small coin hoard's recovery. From readings about Ainslie I am left with the impression he would have proudly announced a monetary recovery.
After hearing that 'heroic' version another local pioneer resident offered a different recollection of the story  of Tennant's capture. One that laid the honour of capturing Tennant to local Aboriginals...
Queanbeyan Age and Queanbeyan Observer - Friday 13 September 1918 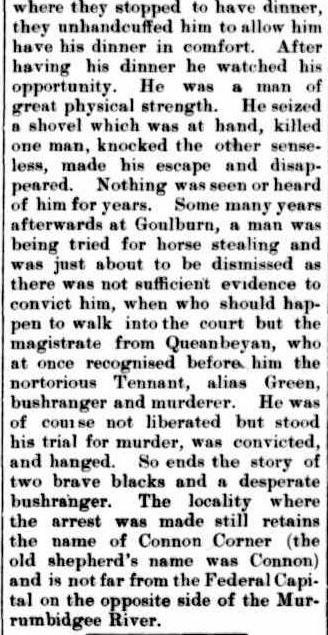 National Library of Australia
At this point I assume the pioneer settler they are quoting is James Wright of Lanyon and Cuppacumbalong  who's wife was indeed noted for her relationship with the local Ngambri. My only concern with this recollection is that Wright didn't enter the area until 1838, but anyway... still no mention of the recovery of Ainslie's coins. Note both articles so far are dated post federation and agree that Tennant was hanged.
But this is what probably happened and the well dressed, sometimes alcoholic and I also think slightly mad Waterloo veteran Ainslie probably shot Tennant when everything was said and done. Just me...
Bathurst Free Press and Mining Journal - Tuesday 1 December 1891 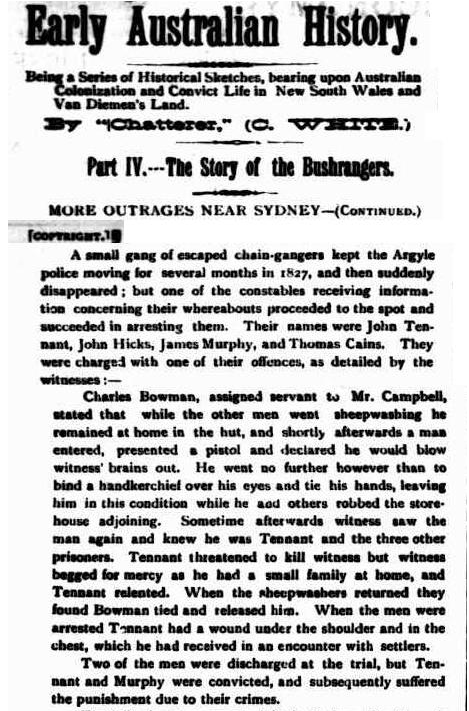 National Library of Australia
It appeared to me the last pre federation account seemed unsure about the fate of Tennant leaving the sentence to the imagination of the reader by reporting 'and subsequently suffered the punishment due to his crimes'. So that is two articles stating execution and one noncommital as to the punishment awarded.

But we do know what punishment befell Tennant...
(and from an appropriately dated source)


Tennant apparently returned from Norfolk Island after 7 years a broken man who died a year later in Sydney.
A few questions at this point, did Ainslie have the coins stolen in the first place? I can think of no reason for Ainslie to claim so if not and why such a specific order of denominations if there was no hope of identifiable recovery and claim of ownership.
Would Tennant have carried his coins on his person or hidden them. It seems Ainslie himself did not carry his money on a day-to-day basis. Perhaps this was the norm. Possibly and I suspect there was simply nowhere he could spend it anyway. The practice of burying coins, today classified officially as treasure hoards in jars, tins and leather pouch is well known.

Still no mention of the coin's discovery but...

A tantalising claim. According to John Gale, a journalist and respected local historian known locally as the 'Father of Canberra', who had associations with the area from 1854...

"Where Tennant stored his booty... was never discovered, not withstanding frequent and ... exhaustive searches to this end. The mountain had numerous caves and mazes well adapted... many never explored". Wikipedia
So lets imagine that 20 shillings of the day was hidden somewhere on Mount Tennent (note different spelling) 180 years ago. Holey dollars measure 38 mm in diameter and Mount Tennent in the Namadgi National Park is a very large and rugged area. If the coins were hidden I imagine they would not be loose but likely they would be secured in some form of a container. The extensive searches of the past did not have the benefit of modern metal detecting equipment. 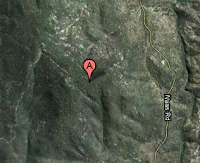 Mount Tennent has been described variously as being 5000 feet (1500 m) and apart from a dirt access road to a fire tower, has a communication tower, viewing platform, assorted walking tracks and a lot of bush.

Before the bushranger's association with the mountain it was officially called 'Mount Currie' after Captain Mark Currie the first European discoverer of the area and before that by the Ngambri, 'Tharwa'.
Why would I be interested if there were indeed seven historic coins located somewhere on the mountain as has been suggested under a dead tree? Well in order to do that we need to understand today's appreciation of Australia's first currency.
Sydney Morning Herald 5th July 2011 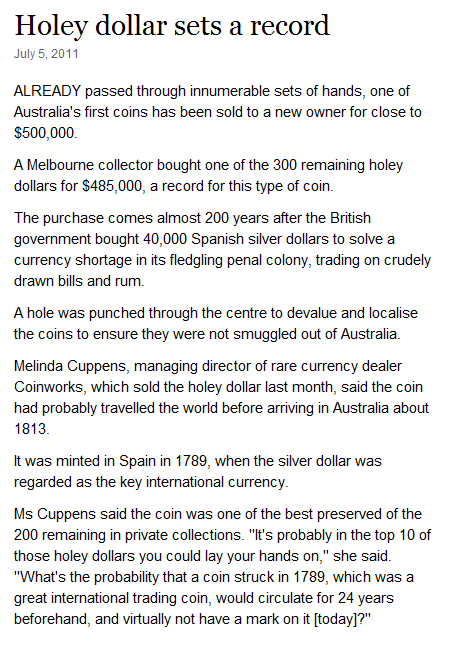 
That astonishing price was for the best holey dollar ever found but who's to say Ainslie's weren't pretty great?
OK... By now you are no doubt convinced. You believe the 'legend' wholeheartedly and have invested in a good metal detector and loaded up the car for a drive out to Nass Road before the trek into Namadgi. After a short walk you stumble upon an archaic stump and emerge clutching a tin containing a hoard of historic coins? The legalities begin, who would own the coins if you found them?
It doesn't seem very clear cut as to possession of discovered historic 'treasure' in Australia, let alone the ACT,  apart from treasure discovered on maritime shipwrecks there is not much information I can find. Discoveries of historic coins still turn up from time to time however. An albany man WA in July found $130,000 worth of gold sovereigns and was declared the legal owner. More at the Herald. 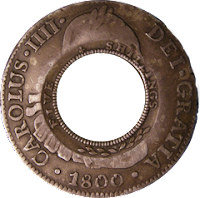 The Australian Government law on these things appears, from reading, to be based on English law which states that if a person dies without passing their property through a will, and has no relatives, then their property passes to The Crown as final owner of all property.
But, if property is established as lost, and remains unclaimed, then that property will go to the person who found it. I think the argument is strengthened by the discovering property's ownership. It seems the Albany man both owned the land and the property was deemed lost...
Our problems in regard the Terror of Argyle's loot is;

Concealed hoards have been being discovered for a century. Personally I think in the vague event of these coins ever being discovered (if they indeed exist) by a coin hunter perhaps the ACT government should provide a substantial monetary compensation for surrender to the Commonwealth of anything found lest the coins be re-discovered on private land in another state and lost forever.

If these legendary coins don't exist or are never found what has the government got to lose by the gesture.

If the legend be true for what it's worth here is my theory on where the coins might be:

Finally as you embark on your Indiana Jones like quest to find the bushranger's treasure and the laurel accolades of the metal detecting world apparently from what I can gather your looking for a cave with a nearby tree stump remnant. I think...