I was walking my dog 'Scruff' on Macarthur Hill in Tuggeranong the other day when I noticed an old, and rare for Canberra, Kurrajong tree growing on the top of the western slope. Lovely to see. In march it was reported that an old tree had been cut down with an axe in an act of mindless vandalism further south (post here) which highlighted the importance of these old slow growing trees from a heritage aspect.

The sight of one of these fine trees is not all that remarkable until I noticed the three smaller trees, obvious offspring, growing nearby and a smaller established sapling growing just down the hill.

The Kurrajong tree being sparsely distributed and indeed often solitary was not generally cleared for grazing because its reputation as a 'fodder' tree was well known and the tree was an asset to graziers during periods of extended drought. This being the case unfortunately the Kurrajongs germinated seedlings were also a tasty morsel for stock reducing natural reproduction. 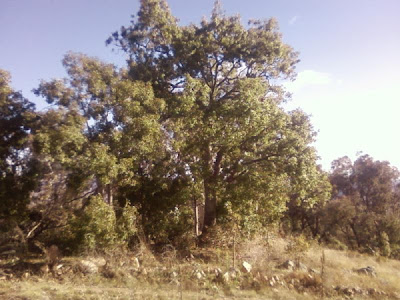 The Canberra suburb of Macarthur was first settled as a residential area in 1983 and leased grazing of the area would have ceased a few years prior to that. Allowing a few seasons for flowering and seed distribution this will have allowed the existing tree about 25 years unhindered by the grazing and trampling influences of cattle and sheep. My thoughts are that this lonesome solitary tree was a lot more numerous pre-settlement. It should be noted that Capitol Hill, the home of Australia's Parliament House was originally known as 'Kurrajong Hill' because of a lonesome specimen. 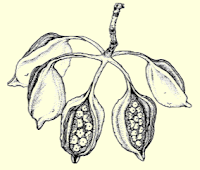 Apart from the tree's use as European animal fodder traditional Aboriginal use of the tree was widespread with the roots of the tree being edible and the seeds utilized in some form after processing. Fiber from the bark of the tree was used for making twine (ref). I have also read that a palatable coffee substitute can also be made from the ground roasted seeds.

The last photo below shows the Kurrajong sapling down the hill just taking form as a strong looking tree. Left unmolested it will in turn now mature, flower and distribute its seed. The regeneration of our urban Canberra habitat can with time be quite remarkable... 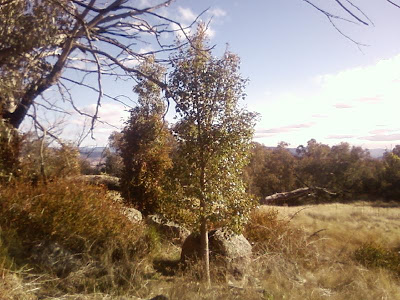