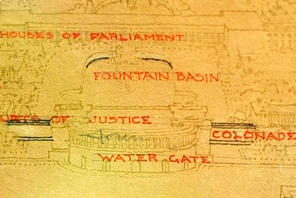 A video from ABC News describing the re-discovery of a drawing by the designer of Canberra, Walter Burley Griffin, a hundred years ago. Canberra historian David Headon found the lost annotated legend of Canberra titled the 'View from the Summit of Mount Ainslie' after it's disappearance from the original collection of 16 drawings 80 years ago.

When I was working for Hansard in the early 1980's, on a trip to the now extinct Government Printing Office, I once 'discovered' a near original set of leather bound, gold embossed with 'second reporter' federation hansards. They had been stored in an unused toilet in cardboard boxes.

The area had become damp and going unnoticed for what I suspect was a very long time many were damaged. It leaves me wondering what else is sitting 'lost' in the vaults of government departments in Canberra...