Continuing on with my fascination for old cemeteries are these clippings from 72 years ago in 1939. What I found interesting, apart from the articles relating to burials 70 years prior to publication, is the reference to Jewish pioneers in the district circa 1870.

The first clipping listed the graves as unknown and the second four days later reported the graves owners as  Emanuelson's (workers) from Cuppacumbalong. The articles have also sparked an interest in me to discover more about the cemetery at Tharwa (heritage register pdf). 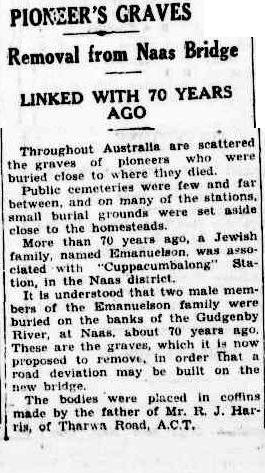 A WALK AT CORIN DAM

A beautiful afternoon and a trip to Corin Dam as a part of my son's learner driving. Corin Dam can be reached via the Cotter or Point Hut Crossing in Tuggeranong. It is about a 30 km round trip.  We took a few photos while we were there... 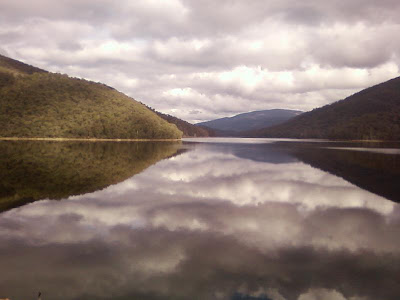 Corin Dam is the first of three dams in a chain-of-ponds system on the Cotter River in the Australian Capital Territory supplying Canberra's water supply. Completed in 1967 Corin is an earth and rock fill embankment dam with a capacity of 70,900 million litres and is used to regulate the flow of water into the second dam in the system, Bendora, which in turn empties into the Cotter Dam for pumping to Canberra. 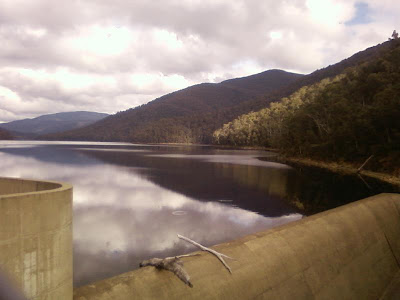 Corin is fed from a 197 square kilometre catchment area with the top water level sitting at 955.54m above sea level. The following pictures were taken on a walk down the far embankment of the dam to the river floor returning along the spillway to the top... 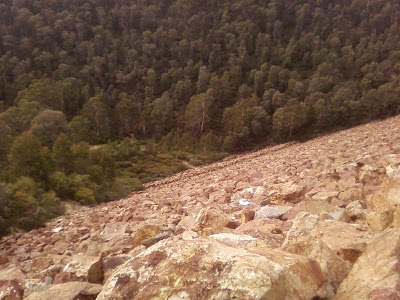 The spillway on the opposite end of the dam is a tall concrete channel descending to the river bed. Signage informs us that abseiling is prohibited and after looking down I can well understand why... 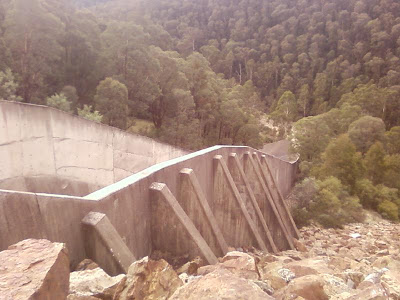 After descending via a well defined track the river floor is particularly picturesque as would be expected on a watercourse in Namadgi and the crystal clear water flows strongly from beneath the base of the dam wall. Depth indicators are positioned along the edge... 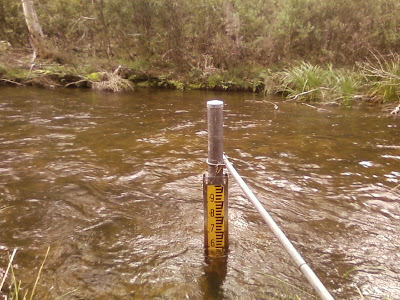 Back to being a river... 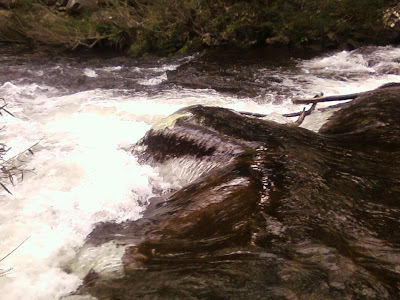 The rock embankment wall towering above us seen from the grassy river bank near the river's outflow... 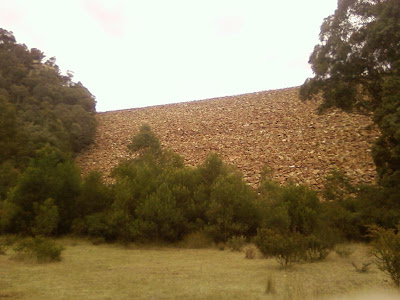 At the base of the dam is the river proper emerging from a large tunnel... 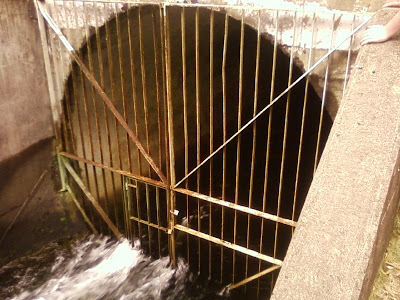 An interesting little measuring 'weir' is located just down from the outflow. Being only 30 centimeters tall I can only think that it is for very fine measurement of some sort. The river moss growing nearby was lush... 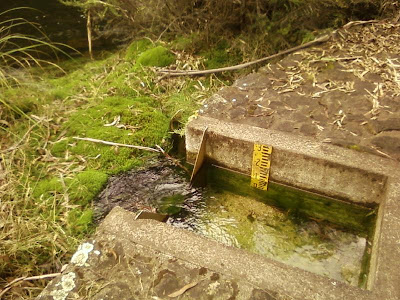 A view from the little measuring station back to the outflow... 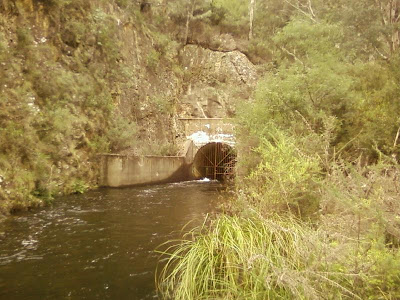 Son Wesley at the base of the dam wall he actually wanted to scale it. I declined... 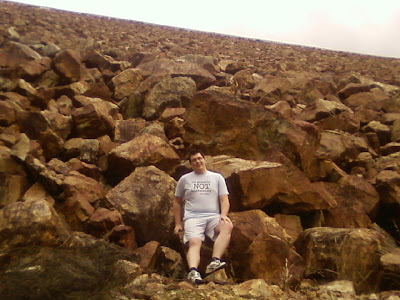 This is the bottom of the spillway and as it isn't flowing the pool at it's base is stagnant. 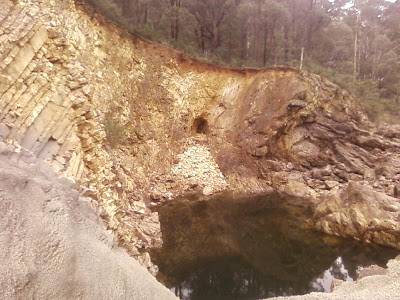 A view of the dam wall from the water side... 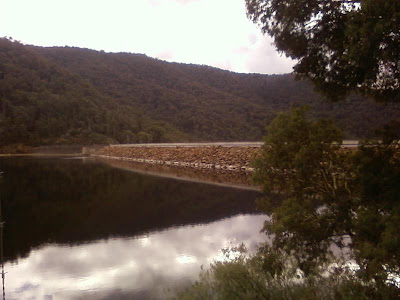 Two emus in a paddock on the way home... 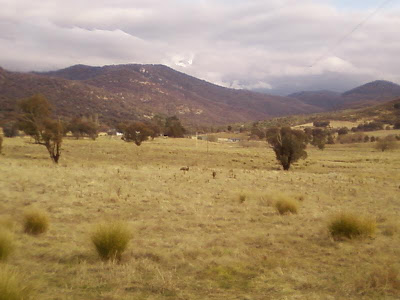 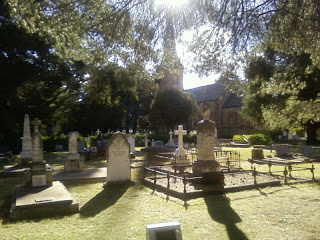 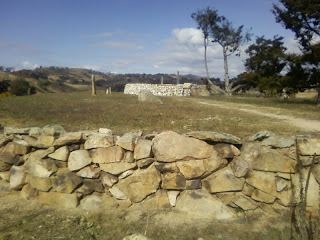 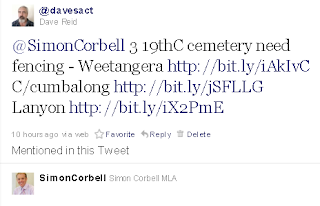 A little bit of railway history and a nice walk with the dog yesterday to the Tuggeranong railway siding on the old Cooma line. The railway line in fact forms the eastern border of the ACT. The railway of course has been out of service for years and the Tuggeranong siding for much longer if the deterioration of the sleepers on the second line are any evidence.

I approach the walk by parking in Henry Melville Cres in Gilmore and crossing the Monaro Highway via the underpass. A short walk up a well defined path leads to a step-over fence leading to the tracks and an easy walking trail alongside the tracks south to the siding. (hour return). 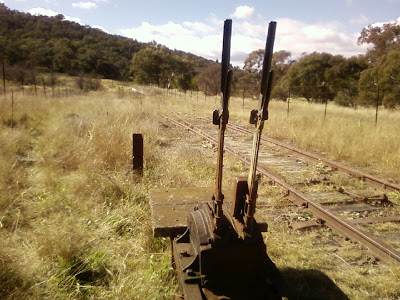 The siding looking back north... 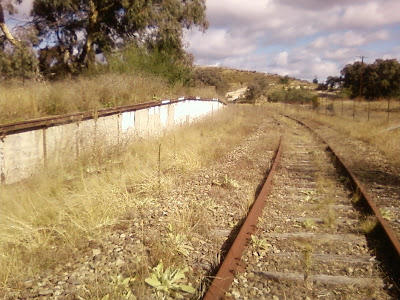 Looking south on the approach... 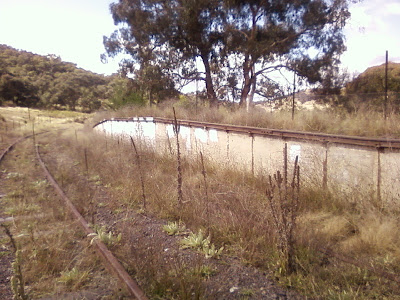 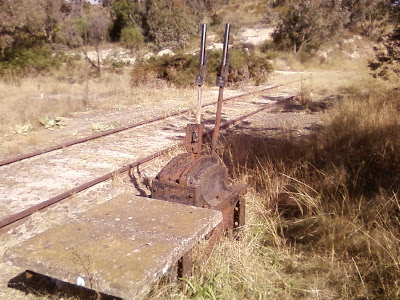 At the end of the siding thousands of railway line plates and spikes dumped long ago... 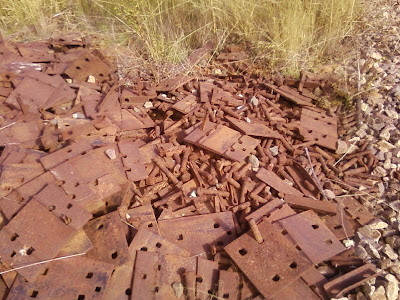 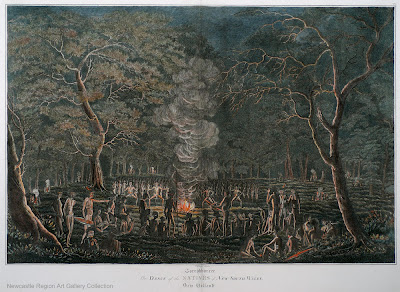 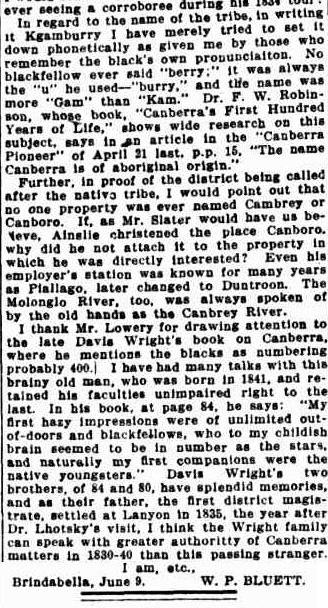 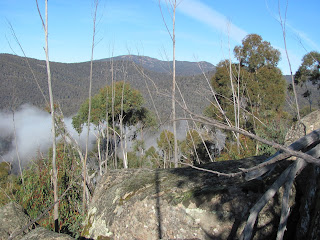 John Evans from Johnny Boy's Walkabout blog's latest bushwalk to the top of Sentry Box Mountain on the ACT border and shows us the commanding view of the surrounding area. John is definitely the man to speak to if you want to know anything about bushwalking in Canberra. More videos can be found at his YouTube channel.


"An ascent of Sentry Box Mountain up the line of the ACT border from the SE, with return via a 500m plunge E to Sams Creek fire trail" 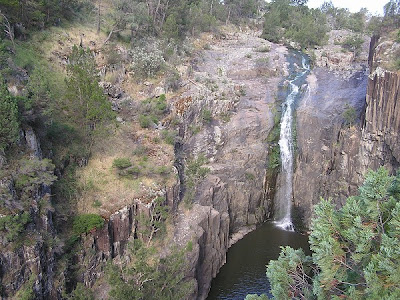 Located to the north of Canberra in Belconnen the Ginninderra Creek runs through a dramatic gorge with a 40 meter drop and then through a series of spectacular waterfalls. The falls were recognized in the 1930's as a possible tourist asset for the capital. Unfortunately the costs were deemed to be too great.

The Ginninderra Falls were once a popular swimming spot (on private land) now closed to the public I believe because of public liability concerns. Shame really... 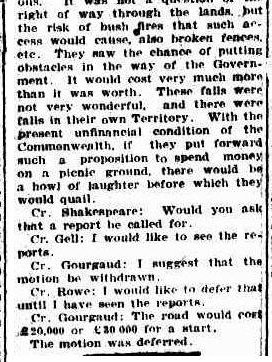