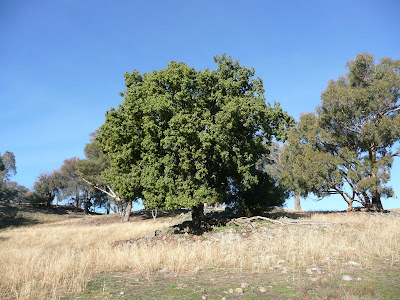 Canberra vandalism is estimated to cost the ACT taxpayer $300,000 a year. Although I sometimes despair at the actions of others in regard the damage, graffiti and theft perpetrated around the capital I do not see most vandalism as being irretrievable. Concrete walls can be washed and painted, recent public artwork can inevitably be reworked and replaced.
In recent months vandals have turned their attention to cultural and environmental targets in the Territory for their senselessness. Targets that cannot be replaced such as the Lanyon Barn gutted by fire last weekend and now a century old Kurrajong tree on the outskirts of southern Tuggeranong.
It wasn't cut down quickly with a chainsaw someone actually scaled the hill and took to the tree's trunk with an axe and felled it. That's a lot of malicious effort even for a vandalizing moron.
If anyone has any information please contact Crime Stoppers ACT

Update: A tweet I just received from Dianna @wolfey_wolf ... Love it! 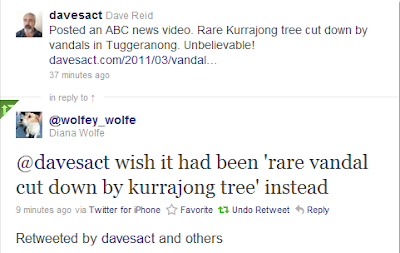