From the signage... This dry stone wall - showing the boundary between the huge Lanyon and Yarralumla properties - was built between 1867 and 1875, in the typical style brought over by British settlers. However, the rabbit-proof fencing at various points along the wall - timber posts, straining wire and wire netting - is uniquely Australian. 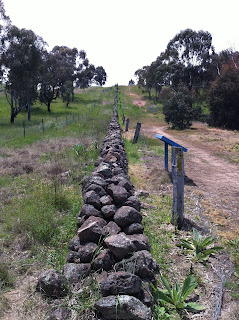 For centuries, and throughout the world, dry stone walls, built without mortar or cement - have been used to mark borders and provide shelter. They are very practical, especially in areas where stones are common and must be cleared for grazing, cropping or building. 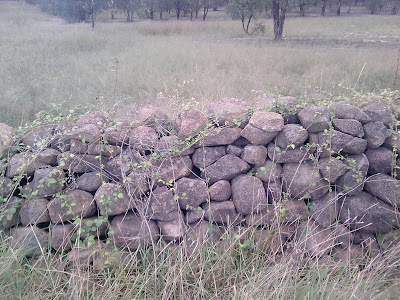 In 1837 this line marked the northern boundary of Wanniassa, a land grant of 2,560 acres taken up by Thomas MacQuoid, Sheriff of New South wales. Twenty years later, the land sold to Andrew Cunningham, owner of Lanyon to the south. By 1875, the log fence along the boundary had been replaced by this stone wall and a 'ditch and bank' system. 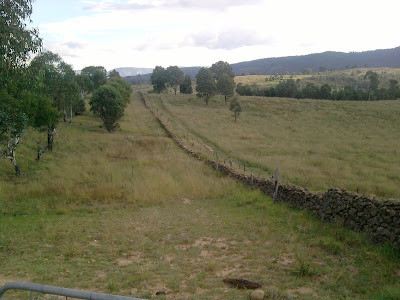 After rabbits swarmed into the area in the early 1900's, rabbit-proof fences were added on both sides of the wall, as required by an 1891 law. Originally the wall stretched 1800 metres from the eastern bank of the Murrumbidgee, near its junction with the Tuggeranong Creek, to what is now Drakeford Drive. Now just 790 metres is left to remind us of our rural past.

Below is a short video showing the western end of the wall where it meets the Murrumbidgee River...
Music by John Morgan


The entry to the ACT Heritage Register is here .pdf . The boundary wall can be accessed by a 1.6 km walking trail from the North picnic area of Pine Island, Tuggeranong A.C.T.
MAP