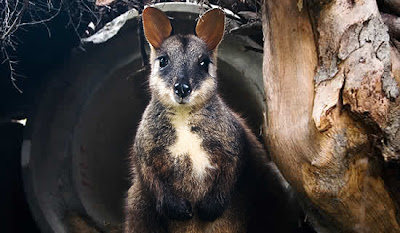 Not seen in the wild locally since the 1950's, the Southern brush-tailed rock wallaby (info) is being brought back from extinction by a unique breeding program being undertaken by a collaboration between the Tidbinbilla nature reserve in the Australian Capital Territory and the Adelaide zoo in South Australia. By a process known as 'cross fostering' the  breeding program allows for female wallabies to have up to six or seven Joeys in the one year. Bred at the Tidbinbilla breeding facility, fifteen animals have already been released into the Grampians (info) and more are planned to be released into area's once populated by the marsupial soon.