An article from The Sydney Morning Herald, Tuesday 13 October 1908 giving a description of the new Federal Territory after its approval as the site for the National Capital of Australia. Interestingly the present site was originally rejected and the Yass site favoured. I have written out the articles text below the map as the text in the clipping will appear too small to read. 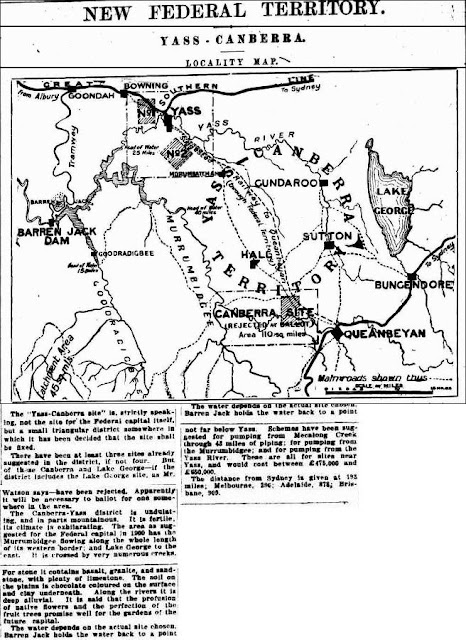 National Library of Australia
Article Text:
“The Yass – Canberra site is, strictly speaking, not the site for the Federal Capital itself, but a small triangular district somewhere in which it has been decided that the site shall be fixed. There have been at least three sites already suggested in the district, if not four. But of these Canberra and Lake George – if the district includes the Lake George site, as Mr Watson says – have been rejected. Apparently it will be necessary to ballot for one somewhere in the area.
The Canberra – Yass district is undulating, and in parts mountainous. It is fertile, its climate is exhilarating. The area suggested for the Federal capital in 1900 has the Murrumbidgee flowing along the whole length of its western border; and Lake George to the east. It is crossed by very numerous creeks. For stone it contains basalt, granite, and sandstone, with plenty of Limestone. The soil on the plains is chocolate coloured on the surface and clay underneath. Along the rivers it is deep alluvial. It is said that the profusion of native flowers and the perfection of the fruit trees promise well for the gardens of the future capital.
The water depends on the actual site chosen. Barren Jack (Burinjuck) holds the water back to a point not far below Yass. Schemes have been suggested for pumping from Mecalong (Micalong) Creek through 45 miles of piping: for pumping from the Murrumbidgee; and for pumping from the Yass River. These are all for sites near Yass, and would cost between  £ 475,000 and £ 550,000. The distance from Sydney is given at 193 miles; Melbourne 396; Adelaide 878; Brisbane 909.”