Located on the slopes of Tuggeranong Hill in the Canberra suburb of Theodore is a substantial Aboriginal "site" of worn grinding grooves in several flat sheets of rock scattered on a small exposed area on the hill.
According to the  Department of Territory and Municipal Services (TAMS) many Aboriginal heritage sites in the ACT have been discovered as a result of archaeological and heritage surveys conducted and by information provided by members of the local Aboriginal community. Other sites are reported by interested members of the public who have accidentally discovered them.
As the whole of the ACT has not been subjected to a comprehensive survey, a record of all Aboriginal sites that occur in the Territory does not exist. It is worth noting that not all Aboriginal sites are ‘sacred sites’. While it is true that some places are considered sacred, such as ceremonial or initiation grounds, the great majority of Aboriginal places, relate to the pursuance of everyday activities.
There are over 3000 known Aboriginal sites in the ACT. 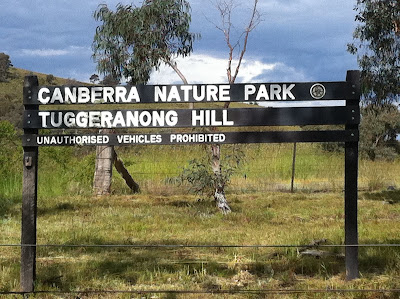 "The grinding grooves are located on an area of exposed flat rock, up-slope from the two eucalypt trees. Aboriginal people used this area extensively for grinding stones into sharp edges for use as axes. There are some 50 shallow grooves worn into the surface of the exposed sandstone rock extending over several metres. 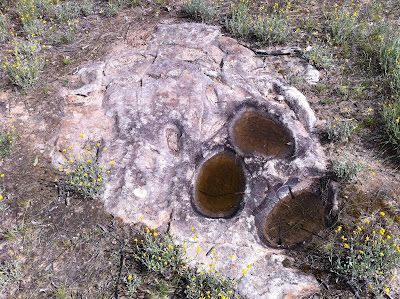 Axe grinding requires water as a lubricant and grinding grooves are usually found near a readily accessible water source. In this case it was the Tuggeranong Creek which flows below the site on the other side of the Monaro Highway. The stones used to make the axes were also selected from the creek bed and brought up to the site for sharpening".

My son Wesley took some video of the grinding grooves for me today: