A series of vandal attacks in Canberra on the Lanyon historical property in the past few weeks (ABC News here and here) have damaged the heritage listed property's buildings. The culprits of these attacks on our heritage went to considerable trouble to accomplish their ends with the access road being a considerable distance from Tharwa Drive on foot and I imagine with travelling the vandalism would have taken them considerable time. 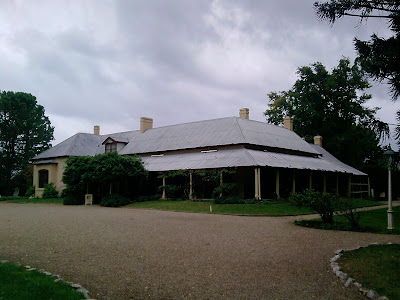 "It's a situation you really can't plan for. There's no point in putting up a barbed wire fence around Lanyon,... You just have to try to do the best you can to instill community understanding of the values of a place."


Lanyon is a national treasure. It is particularly important to the ACT as it is a remnant of a time when the European fabric of civilisation was established on the plains of what was to become the national capital. Lanyon has visible and tangible evidence of the colony's convict beginnings and was once the boundary of the "Limits of location" the area west beyond the Murrumbidgee River being beyond government control in the 1830's. We are very privileged to have such an historical treasure that is so ably maintained by the ACT Government as an educational and recreational facility not only for the community but for the nation.

I think it might be time to upgrade security. Regular patrols and electronic surveillance seem now to be in order and I think if the entry fees are raised a few dollars to cover the additional expense that would be appropriate. Ultimately security measures for Lanyon should now go to the top of the ACT government's heritage to-do list and in my opinion robust public flogging (granted regularly at Lanyon in the 1840's) should be awarded to the perpetrators if caught.

For those unfamiliar with  the L'anyon Estate I have strung some video together showing a small part of the heritage listed property. Note: The windows of the Old Kitchen had been removed for refurbishment at the time of filming...