When the Federal Capital Territory was established in 1911 the residents of the emerging, yet unnamed, capital city were stripped of their "franchise" (info) to vote in elections. The Limestone Plains area, having only a small population, could not even bear the status of a council. The government of the territory was in effect the Minister of Home Affairs, King O'Malley (1858-1953)(bio)(post). 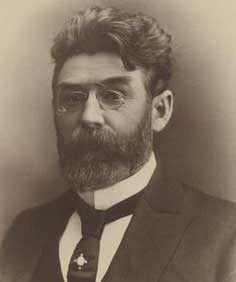 King O'malley
In 1902 the passing of the Commonwealth Franchise Act allowed men and women 21 years and over who were British subjects to voluntarily vote in Commonwealth elections. On the 1st of January 1911 the 'Territory for the Seat of Government' was established to provide the newly federated states of Australia a capital city. Shortly after the declaration of the Federal Territory, the new federal territory residents were stripped of the voting rights that they had once been entitled to. O'Malley, upon taking control immediately had the prohibition (info) of alcoholic beverages imposed on the population as well. They must have felt a little oppressed.
1911: Population of the ACT - 1,714


The Jervis Bay Territory (post) was proclaimed in 1913 and in 1924 compulsory voting was introduced for Federal elections but still excluded residents of the new city of Canberra. Rumblings of dissension started to rise in the young populace and a campaign began with the formation of the Canberra Citizen's Rights League, the Australian Natives Association and most importantly Dr. Lewis Windermere Nott (1886-1951)(bio) who, eventually after 20 years of continuous campaigning for representation would become the Australian Capital Territory's first representative in the Australian Parliament.
"A city or a territory or a country is something far more than a physical and a geographical distribution. It is something far more than arbitrary decisions as to matters of longitude and latitude. A city, a territory, or a country, is nothing but a name on a map unless in the very essence of it's foundations it is based on a fellowship of men and women bound together by a uniformity in all citizens rights and privileges". Dr. Nott - Canberra Citizens Rights League - June 1944 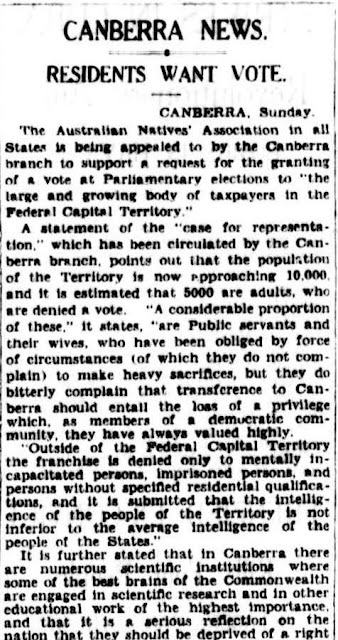 National Library of Australia (here)
The calls for the re-establishment of the right to vote increased steadily as the population swelled and more and more workers were establishing themselves in the capital from other states in the Commonwealth. These new residents were accustomed to voting in Federal elections and wished to remain doing so. Canberra was now in the hands of the Minister for the Interior Thomas Paterson (1882-1952)(bio) who dismissed requests for representation offhand...
The Canberra Times - 2 May 1936 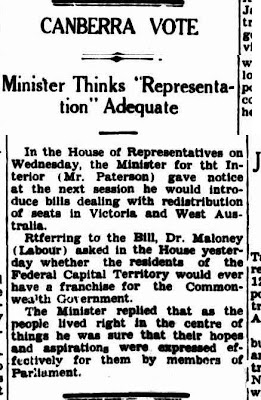 National Library of Australia (here)
1939: Population - 10,000
The Argument of "taxation without representation" was put forward by Dr. Nott who was by then the chairman of the Canberra Advisory Council and his "contention" was supported by Sir Robert Garran (1867-1957)(bio)...
The Canberra Times - 13 June 1942 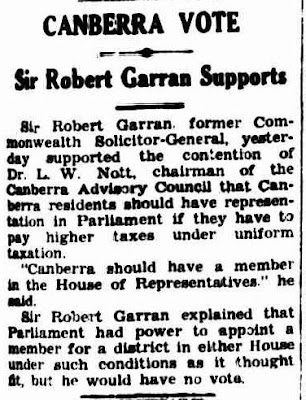 National Library of Australia (here)
1945: Population - 13,000
More momentum to the cause came when Sir Walter Jackson Cooper (1888-1973)(bio) puts forward a population target for the granting of franchise...
The Canberra Times - 21 September 1945 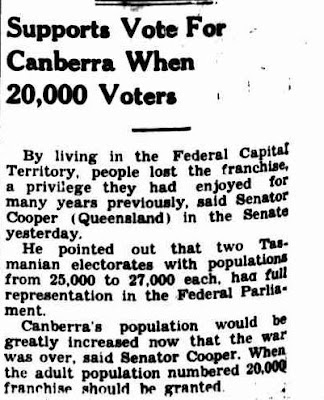 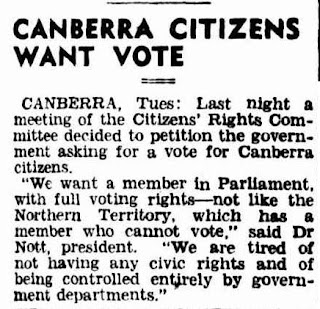 National Library of Australia (here)
And in 1948 the first cracks appear in the Government's resolution...
The Sydney Morning Herald - 6 April 1948

National library of Australia (here)
In 1949 the Australian Capital Territory gained its first representative in the Parliament. Standing as an Independent, Dr. Lewis Nott became the A.C.T.'s first member of the House of Representatives although with limited speaking and voting rights. The following year a local Council was proposed for Canberra planting the seeds of Canberra's first independent level of local government 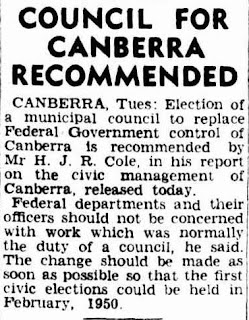 Following the dismissal of the Whitlam Government during Australia's Constitutional crisis in 1975 (info) the Australian Capital Territory elected two representatives to the Australian Senate for the first time. The ACT now had representation in both houses of Parliament. The new government of Prime Minister Malcolm Fraser appointed Reginald Greive Withers (bio) as Minister for the Capital Territory in 1976.


Despite a 1978 referendum (info) where 63.75 % of the population, preferring the current system, voted against self-government, in 1979 the Legislative Assembly became a House of Assembly comprising of 18 elected members. 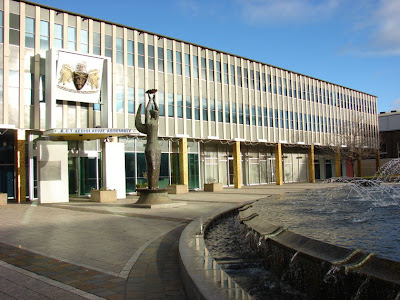 
In 2006 the ACT Labor Government led by Chief Minister John Stanhope (bio) passed the ACT Civil Unions Act to allow formal recognition of same-sex relationships in the Australian Capital Territory. The Federal Howard government exercised it's power of veto and overturned the legislation.

The voting population of today's Australian Federal State and Territory electorate's is roughly 85,000 to 100,000 in New South Wales, Victoria, Tasmania, South Australia and Western Australia. The Northern Territory and Australian Capital Territory hold around 60,000 and 120,000 voters.