SYMBOLISM IN THE CANBERRA PLAN

The competition to design the new Federal Capital City of Canberra in 1913, having 136 entries, ended with the decision to award Walter Burley Griffin (1876-1937)(bio) the win for his blue-print of a geometric design cleverly worked into and around the plains and hills of the Molonglo River. Landscaping on a grand scale would provide a man-made recreational lake as the centerpiece to the Australian Government's Federal "Parliamentary Triangle". 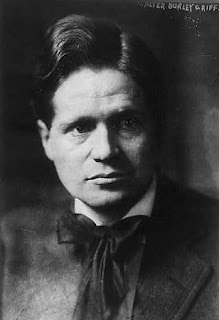 Walter Burley Griffin
The hills and mountains of Canberra in Burley Griffin's plan define three axes, a water, a land and a municipal axis. Circles, triangles and semi-circles connect avenues and boulevards that cross the lake forming radial spokes emanating from the seat of government on Kurrajong (Capital) Hill. The central lake was to be semi-circular and the east and west basins circular. Burley Griffin's sketches however prompted discussion as to whether the design had other deeper meanings. 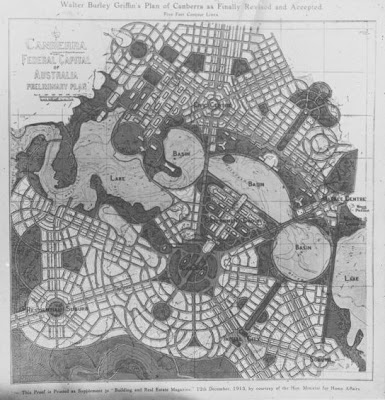 National Library of Australia (here)
Burley Griffins design for Canberra has been linked by many different theorists to esoteric places such as Stonehenge, Ancient Glastonbury and the Great Pyramids of Egypt. The plan has evoked speculation of links to symbolism such as the Kabbalah (info), Freemasonry (info) as well as the Occult (info). Whether the interpretations are correct or not, people seem to see more in Burley Griffin's plan than simple architectural geometric design.
The following video gives an idea of what one person sees in Burley Griffin's plan. YouTube describes the video as a comparison in symbolism between Australia and America - The Occult history of Canberra...