On the east slopes of Mount Taylor (post here) in the modern day Canberra suburb of Pearce is a single Blakely’s Red Gum (Eucalyptus blakelyi)(info) with a prominent Aboriginal scar. Aboriginal scarred trees were created by the deliberate removal of the bark to make items such as canoes, coolamons and warriors shields.

This process leaves a recognisable scar on the tree that meets several identifiable criteria (info). Most scarred tree's remaining in the Australian Capital Territory have been retained in the wooded nature parks and residential gardens of areas that were not cleared for agricultural purposes since European colonisation. 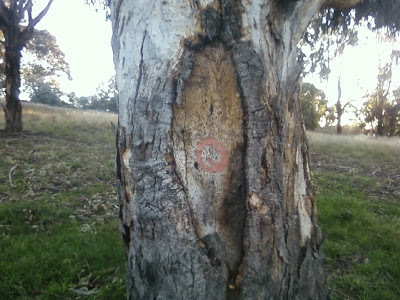 A scarred tree needs to be at least over 200 years of age to qualify as a source for appropriate bark material. Manufacture in the region is believed to have ceased around the turn of the century and the scarred trees remaining would have been at least 100 years old at the time of the bark's removal in order to be large enough to be useful and have a solid bark of an appropriate thickness. 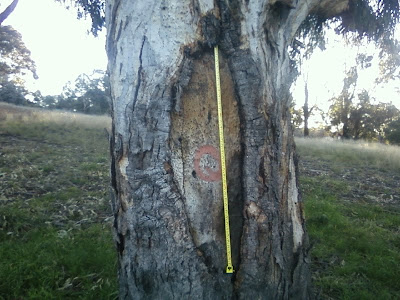 This scar is typical of most scars in the area being a 1 meter (3 foot) narrow oblong scar pointed at top and bottom and being located just above the ground on the base of the tree's trunk. The Blakely's Red Gum is a tree native to, and common in the Canberra region and the species was commonly used for the manufacture of bark products by Aboriginal people of the region for generations. 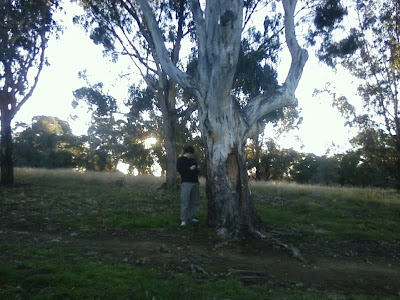 The Blakely’s Red Gum is a medium sized tree (up to 24 m) that sheds its bark in summer every year giving it a smooth white/cream coloured bark, with distinctive patches of grey. It grows on undulating plains and slopes above the cold valley floors and flats. They occur in areas where the annual rainfall is 400-800 mm (15-30 inches) in moderately fertile soils. Blakely's do not grow in dry rocky soils and are a known food source for Koalas.

Flowering from October to December each year the tree is pollinated by birds and insects and it's seeds are dispersed by the wind. The Yellow Box/Red Gum Grassy Woodland that it grows in is today an endangered ecological community. Clearing for agriculture and residential development, inappropriate grazing, weeds and firewood collection has greatly reduced the species natural numbers. The Blakely’s Red Gum is prone to die-back from attack of it's canopy by Christmas Beetles (info) in the summer and Lerps (info) in the winter. 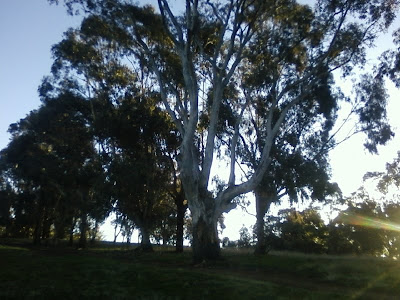 Unfortunately this tree has seen the ravages of Canberra suburban life over the last 40 years as evidenced by the markings and nails from numerous children's tree-houses and a single graffiti symbol painted on the face of the scar. The tree I believe is an important and unique feature for the suburbs of Chifley and Pearce and an existing symbol of the area's Aboriginal history and heritage.

I think it would be appropriate to fence the tree to prevent further damage, place some educational signage and perhaps locate a park bench nearby. I have a page on Aboriginal Scarred Trees in the ACT (here). Wanniassa trees (here) Westridge trees (here) and a Red Hill tree (here)