Walnuts were being imported into the colony in the early 1800's and by at least 1838 they had made their way to the Limestone Plains. Walnuts, after importation, I would have thought been a luxury item in the colony. The walnuts from the clipping below were imported from Valparaiso Chile (info).

National Library of Australia (here)
I was visiting Lanyon homestead (post here) recently whilst they were repairing the stonework in the walls of the "old kitchen". The old kitchen was the original L'anyon Estate homestead and was built circa 1838 by James Wright during the heyday of his pastoral and agricultural empire at Lanyon. The exposed stone "blocks" held a little surprise, 170 year old walnut shells. 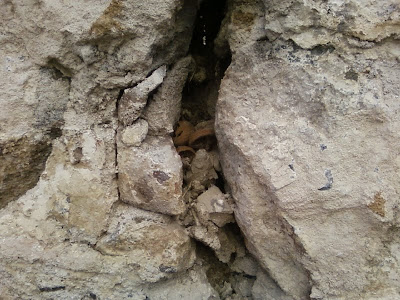 These shells were interred during the construction of the original homestead after having already had a long sea voyage to Australia and then being transported the arduous trip from the Sydney colony to the Limestone Plains. Were these walnuts the luxury food of James Wright? or were they a treat for the convict stonemasons? we will never know, however, someone threw their discarded shells into the walls... 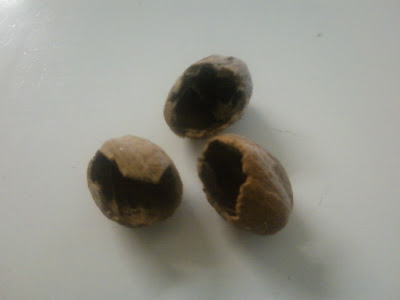