A glebe (here) in the Roman Catholic and Anglican Church's tradition, is a portion of land dedicated to the church. The Parish Priest could establish his own agricultural enterprises and/or pursue other commercial interests such as retail stores and  rental tenants. Any profits made in the pursuit of these activities was considered a stipend (here) for the parish Priest and for parish expenses.

Mr Charles Campbell of the Limestone Plains property "Duntroon Estate" donated in 1841 not only the funding for the church, residence and two acres to house them but a donation of 100 acres (40 hectares) as well to be set aside as the Church's Glebe. "The Glebe Farm" of the Church of St. John the Baptist of the Limestone Plains, with another 200 acre donation, was approximately 300 acres (120 hectares).
The Canberra Times - 11 May 1944 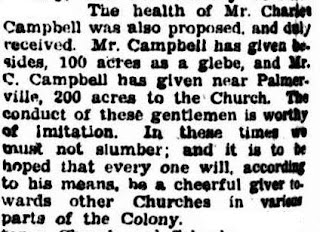 National Library of Australia (here)
The 100 acre portion "Glebe Farm" was apparently quite a prosperous enterprise for the incumbent padre. Yields from crops in the area were reported to have been more than double the average of those recorded years later in the early 1900's. One years crop of oats off of 14 acres (5.7 hectares).on the river flats of the Molonglo River when threshed yielded 800 bushels (12.4 Tonnes) of grain.
The Sydney Morning Herald - 7 December 1906 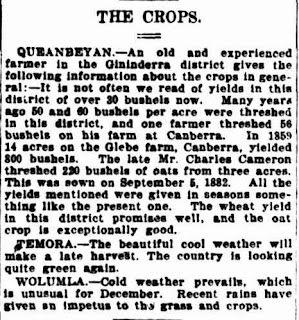 National Library of Australia (here)
In 1874 a man named Ebenezer Booth took residence on the Glebe Farm and built a house (in the middle of what is now Commonwealth Park to the east of Narang Pool) in which to permanently reside and operate the district's only retail store. His appearance in the district and his chosen profession must have gladdened the padres stipend as well. 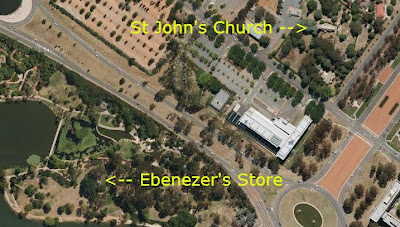 The Glebe Farm Store operated successfully until some time later? when John Murray took over the business and the Glebe Farm Store became Murray's Bakery and Store.  Murray's bakery and store may have experienced a hot Canberra November wind when a fire burned the building down in 1923. This would have been a tragedy for the community with Murray's being the only bakery in the district at that time. A number of stunted pines and English elms remain today on the spot where the store stood. The store had operated continuously for 50 years and has the distinction of having been Canberra's first shop.

National Library of Australia (here)
With the establishment of the new Federal Capital of Australia, Canberra in the early 1900's, all lands within the Federal Territory were resumed. The churches lands were one of the first to be resumed being in such a central position of the new City. Portions of the Glebe Farm still exist today in parks in the inner Canberra City area. 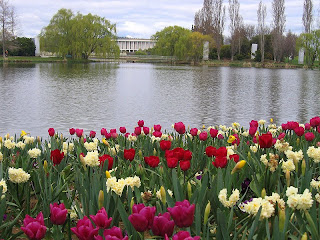