Located in today's Canberra suburb of Amaroo is the ruin of a three room field stone cottage that was erected by John and Maria Crinigan in (circa) 1842. John was an Irish convict who at the age of 19 was sentenced to transportation for life to the penal colony of New South Wales for “assaulting habitation”. He arrived in 1836 and was assigned to work for George Thomas Palmer (1784-1854)(bio) on his property Palmerville (later to become Ginninderra). 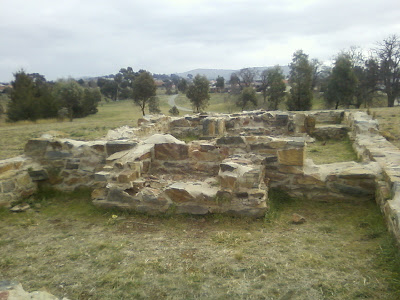 Smaller room with fireplace
His wife Maria (Mansfield), a free settler, arrived in the colony with her parents in 1832. She married John in 1842 and John was pardoned in 1849. John bought four parcels of land in Ginninderra in 1859 selecting one block on the Ginninderra Creek to build his stone cottage. The site of the cottage was in an advantageous position with a deep pool of permanent water and a nearby ford to cross the creek making it a key location and one that Palmer would have wanted protected from squatters (info). 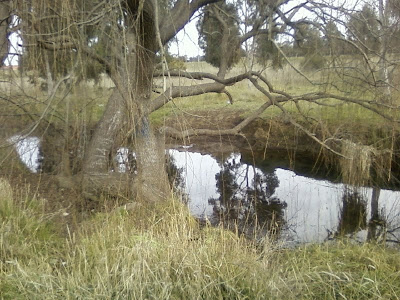 The deep hole in Ginninderra Creek
A brawl was recorded as having occurred at the cottage in 1858 between a Thomas Wells and a Samuel Marley with Marley dying ten days later at the Queanbeyan Hospital from massive head wounds. Maria Crinigan died in 1863 and John married the widow Margaret Logue and moved to “Camberry” Maria's Molonglo cottage (today's National Library site) in 1863. John died in 1899. 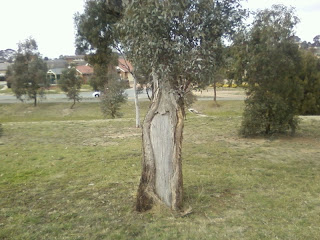 Scarred Tree "out back" of the cottage (Aboriginal?)
John and his first wife Maria experienced first hand the high level of mortality for the era having 10 children and tragically only one surviving, Eliza Jane, who was born in 1850. Eliza married Duncan McInnes in 1867 and lived in the cottage until 1875. Jane fared better than her mother, having 13 children (4 in the cottage) and 11 surviving into adulthood. The cottage went to ruin when the family moved to Glenwood, near Hall in (circa) 1875. Eliza had a hard life as a homesteader and is remembered by her descendants for her strength, determination and hospitality. She was still riding horses well into her eighties. 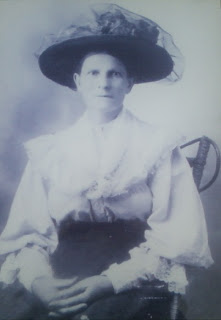 (Eliza) Jane McInnes (nee Crinigan)   1850-1932
The cottage itself is a typical 3 room stone design of the mid 19th century of which there were over 40 along the banks of the Ginninderra Creek. The low remaining foundation walls do not leave any indication of where the windows were located however the internal doorways and fireplaces are prominent. The 3D model below is an impression of the building from the ruins dimensions and available features. 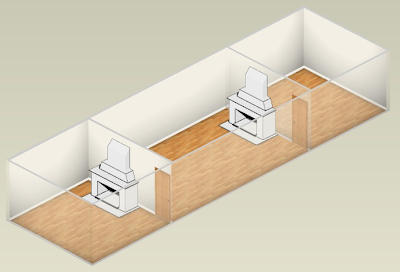 A schematic of the layout of the cottage 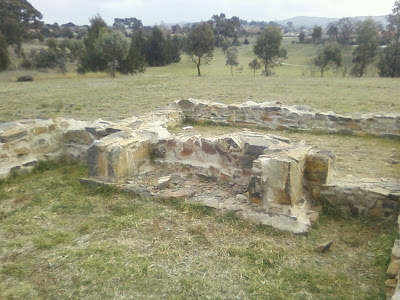 The main (central) room with the larger fireplace and room beyond 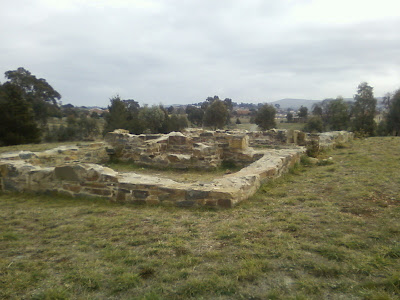