It appears that in the 1840's it was possible to establish a cattle station in the colony of New South wales "beyond the prescribed limit's of the nineteen counties" if only one could "secure" the stock for the property. This apparently was not always done legally. In 1841 a Daniel Macquine and George Oaks were pursued to the headwaters of the Tumut River, a distance of 100 miles (160 kilometers), with stolen cattle secured from Mr. Robert Campbell's (1769-1846) (bio) "Duntroon Estate" (post here) on the Limestone Plains (present day Canberra).

In the pursuit conducted by Campbell's superintendent Mr Kennedy, the "cattle thieves" and animals were tracked westward towards the Murrumbidgee River where 15 bullocks were recovered at the "Balconan Station". The astonishing (for the time) reward of 50 pounds was to be awarded to the man who could find the perpetrators and possibly the rest of the herd.... 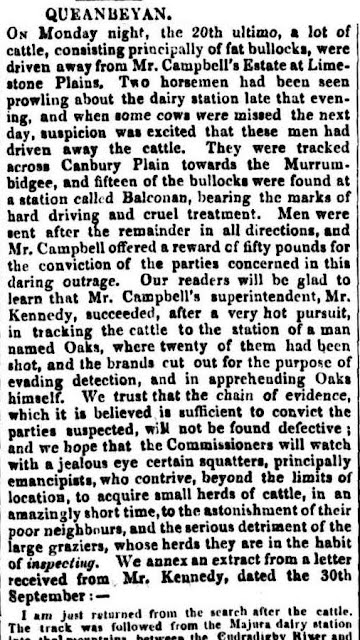 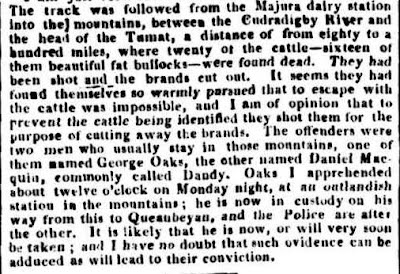