The west ridge of the limestone plains (present day central and northern Canberra) divides the city from the Woden valley to the west. Canberra's designer Walter Burley Griffin (1876-1937)(bio here) named the natural feature 'Westridge' and marked it on his 1911 plan of Australia's capital city 'Canberra'. 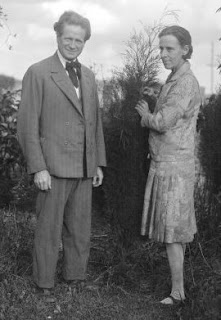 Walter Burley Griffin and wife Marion 1930
Image Wikipedia commons (here)
The area was occupied for centuries before European settlement and this is evidenced by the amount of scarred trees and reported stone artifact scatters that exist on the ridge. Westlake, Canberra's vanished suburb (post here) sits on the eastern side of the ridge and numerous walking tracks (well used) cross the area. Several Aboriginal scarred trees (info here) are easily accessible from the track on the summit of the ridge. The species of eucalyptus and the size, shape and age of the tree must have made this area particularly suitable. 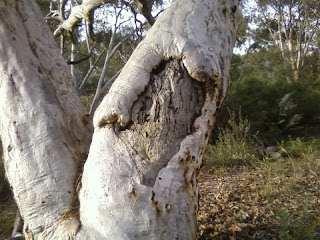 Some of the scars are noticeably older than others with some having died long before these remaining trees. One tree I found has a large scar on one side and a smaller scar on the opposite side. The trees all appear to be in an area no larger than an acre (0.4 hectares) and grow along the ridge line. The area along the ridge is flat and gently slopes down towards the nearby Molonglo River (today's Lake Burley Griffin). 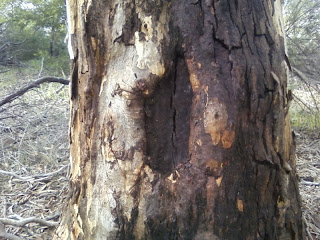 Upon closer inspection of the scars I discovered that 'white ants' or termites (info here) are attacking the exposed scars on the tree-trunks and are eating the tree out from within. These trees are very old and are approaching the end of their lifespan. Most of the living trees have dead sections that are vulnerable to the insect. 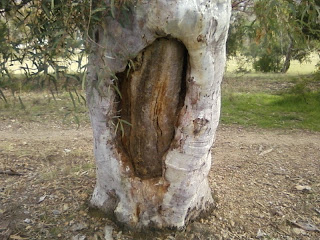 Perhaps a little maintenance of these trees would be in order to extend their lifespan. By this I mean a little insecticide. The dead trees are probably lost to the termites however, some states reclaim the dead, scarred tree-trunks and mount them under a covered roof somewhere significant, an Indigenous Australian museum perhaps. 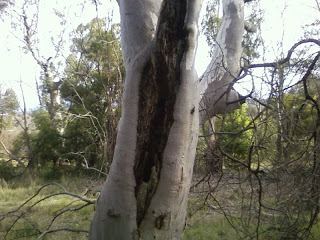 Tree being eaten from the inside out by termites. 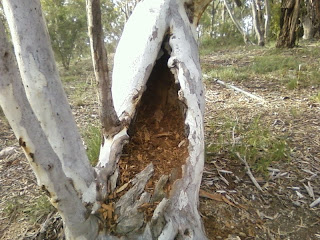 Just wood chip and sawdust left in this one. 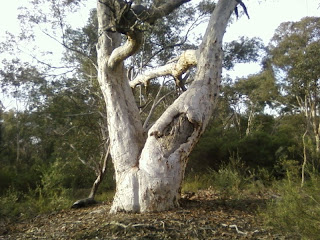 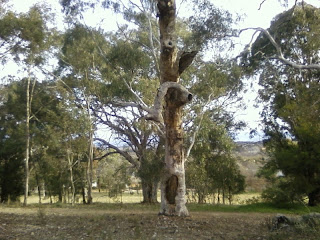