In 1934 Canberra, the Australian Federal Capital, and outlying areas of the Australian Capital Territory experienced floods that damaged infrastructure such as the wooden Tuggeranong Creek Bridge going to Cooma. The bridge sustained irreparable damage and as a result required replacement. The bridge was relocated a short distance and required a deviation in the road. 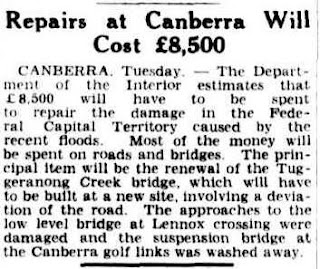 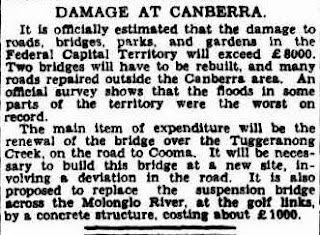 The Sydney Morning Herald - 31 October 1934
clipping NLA (here)
The same flood washed away the suspension bridge at the Canberra Golf Links and the low level bridge at Lennnox Crossing on the Molonglo River was damaged. The repair bill for the capital was recorded to be over 8,000 pounds. The creek today cascades through the rocks and appears to be calm and gentle belying it's terrible potential as evidenced by the reports of destruction and the steep banks of the creek upstream of the bridge. 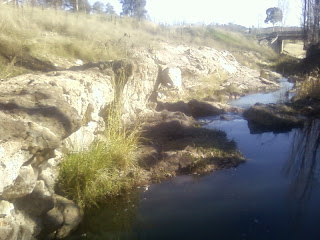 The new bridge is now a relic of the road to the Monaro (post here) and remains today a nondescript 'urban fringe' feature of suburban Theodore in the Australian Capital Territory. There is nothing special about this little bridge, it being a fairly standard concrete and steel beam structure spanning about 12 meters. The bridge today however remains impervious to floods and marks the point where the Tuggeranong Creek becomes Tuggeranong's storm water system. The creek only travels a short distance before the bridge from what appears to be a small catchment and a 'lakelike' spring a few kilometers away. 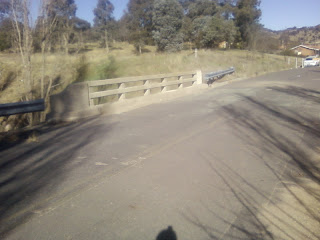 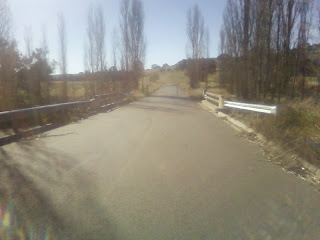 The Tuggeranong creek was/remains an important site for the local aborigines for it's supply of water and it's proximity to an excellent example of Aboriginal 'axe grinding grooves' (post here) located approximately 100 meters away. The process of grinding stones (also supplied from the creek) into sharp tools required water which was pooled in a groove next to the 'working' groove. 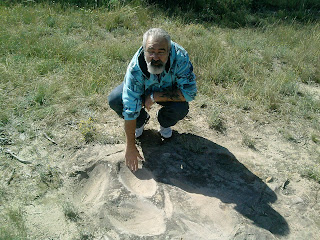 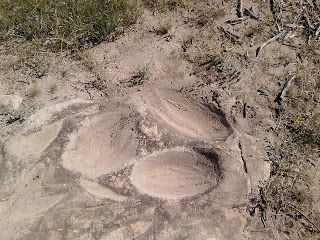 A weathered embankment of stones (19th century first bridge?) is 20 meters up the creek and from observing nearby rock formations the feature does not appear to be natural. The embankment appears to be 'constructed' as a course wall by stacking field stone, although it is now heavily weathered and undercut by the creeks flow during times of flood. 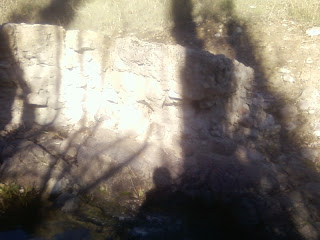 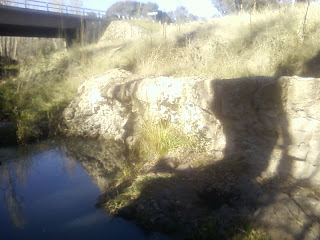 Today's bridge on current Monaro Highway in background.
The Tuggeranong Creek flows from the bridge in a snaking concrete channel into Isabella Pond to settle before filling Lake Tuggeranong and then merging with the Murrumbidgee River. Sadly the creek had become a dumping ground for building rubbish, old tyres and drink containers. 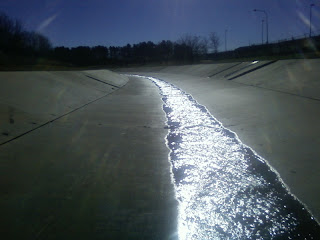 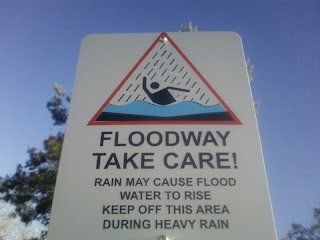