A TALE OF TWO CITIES

Even before the Commonwealth was born, a Royal Commission was established in November 1899 to report on 45 proposed sites for a new Federal Capital. The newly appointed Commissioner, Alexander Oliver (1832-1904)(bio here) handled the New South Wales government inspired commission. Oliver undertook to complete reports on several sites.

After the Federation of the Australian States (info here) in 1900 the question on where the capital was to be located was addressed when an agreement was made, and provision included in the new Australian Constitution (info here). The site for the new capital city of Australia was to be within New South Wales but not closer than 100 miles (161 km) from Sydney. 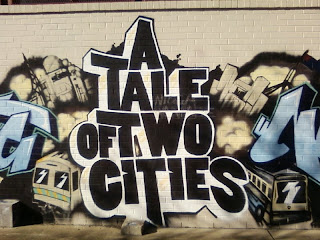 Graffitti on a wall outside the Burns Club in Kambah ACT (circa 2009)
Though a site had not been confirmed, opposition to the proposed locations prompted a strong reaction from the populace in Victoria. This reaction saw a political movement arise in Maffra Victoria (near Sale). The organisers of the movement saw the astonishing (for the time) expenditure of  "millions" of pounds to establish a new city as "lavish for the back-blocks". The movement demanded in no uncertain terms the new Commonwealth of Australia to allow the Capital to be established (surprisingly I think) in Sydney and not "somewhere in the bush".

The Maffra Shire Council of the day supported this feeling and created a movement that was spreading to other shire councils in Victoria to support constitutional change to this end. The following newspaper article is from New South Wales. 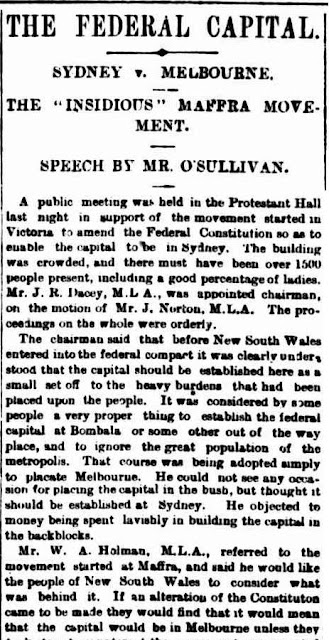 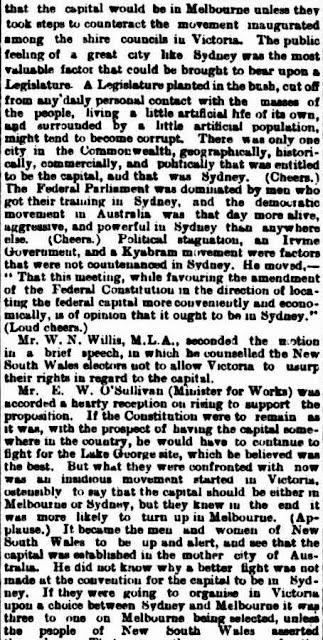 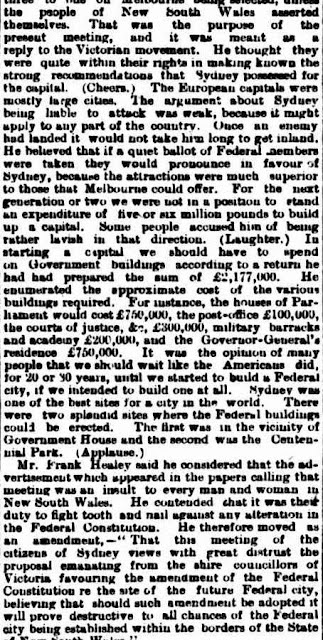 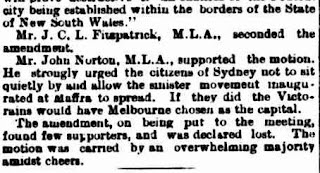 For the record, the present day "site" of Canberra was selected for the location of the Australian National Capital in 1908, 170 miles (280 kilometers) south-west of Sydney, and 410 miles (660 kilometers) north-east of Melbourne.