Aboriginal scarred trees are old, at least 100 years of age and up to the life span of the species of tree, which can be more than 500 years. Surviving scarred trees are relatively rare owing to the land clearing practices of early European settlers, destruction during bushfire and loss through natural attrition.

As scarred trees are not very common they are assigned a much higher significance in the ACT than they may be elsewhere in the country. I have a more comprehensive post about Aboriginal scarred trees in the Australian Capital Territory (here). 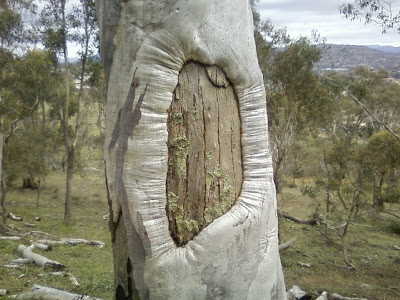 Red Hill Aboriginal scarred tree 4/6/2010
This one could have made an Aboriginal vessel called a 'coolamon'. Coolamons were traditionally used by Aboriginal women to carry water, fruits, seeds, nuts and to cradle babies.(Wikipedia here)

I was actually out looking for a small, disused colonial Quarry, supposedly located on the western slopes of Red Hill that I have found references to, and had given up for the day when I came upon this beautiful tree. It stood out brilliantly white like a ghost among it's companion trees. It also had an outstanding Aboriginal scar that I have not found documented anywhere. 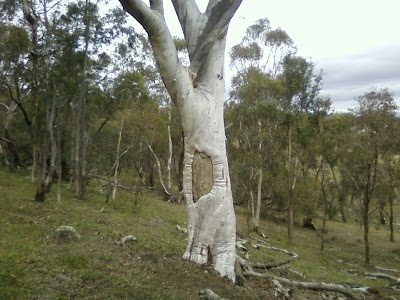 The tree is actually a 'Eucalyptus pauciflora' (Wikipedia article here) It is predominantly known in Canberra as a 'Snow Gum' or 'Ghost Gum'. This Australian native eucalyptus tree only grows to about 30 metres tall and is described as a small to medium spreading tree. It can have a somewhat crooked trunk and many branches with distinctively beautiful grey and cream bark.

The Snow Gum tree is very long-lived and very slow growing and are usually found growing in between 1300 meters (4265 feet) and 1800 meters (5905 feet) in altitude above sea level where they form the altitudinal limit of the Australian tree line. Few stands of lowland Snow Gum remain and considerable efforts are being put into preserving the remnants. 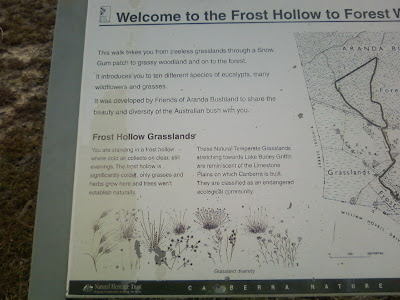 There is a remnant stand of Snow Gums preserved in Aranda in a natural 'Frost Hollow' at the base of Black Mountain. The Snow Gum is the most cold-tolerant species of Australian Eucalyptus and has now been introduced to Norway.