During Australia's involvement in World War I over 330,000 patriotic Australians loyal to the British monarchy went into battle for their 'King and Country'. In front of Canberra's Provisional Parliament House (Australian Museum of Democracy) in the Australian Capital Territory is a stone and bronze monument to King George V.

The future King of England, Prince George Frederick Ernest Albert Saxe-Coburg-Gotha (1865-1936)(bio here) was born to King Edward VII (bio here) and Queen Alexandra of Denmark (bio here) in 1865. Being the second son of the King it was not likely that George would ever ascend the throne of the British Empire.

George chose the life of a professional naval officer and with his fathers approval he served in the Royal Navy from the age of 12. George first visited Australia when serving with the Royal Navy with his elder brother Prince Albert aboard the HMS Bacchante in 1880. He married Mary, the daughter of the Duke of Teck in 1893 and had four sons including Edward VIII (bio here) and one daughter.

After Federation (info here) of the States of Australia, the Victorian city of Melbourne was nominated as the temporary seat of the Australian government from 1901 to 1927 while the new Federal Capital named Canberra was being constructed. H.R.H. The Duke of Cornwall and York (later H.M. King George V) opened the First Parliament of the Commonwealth of Australia on 9th May 1901.

During their visit to Australia, the Daily Telegraph newspaper described the royal couple in the following manner: 'The Duke is extremely pleasant faced and good natured but is apparently not a man of many words. He never displays the slightest sign of being bored, and though he has the capacity for preserving a masterly silence, he appears to take a keen interest in everything about him…' 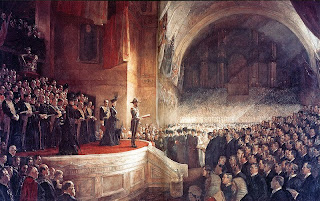 Things however were to take a turn following the unexpected death of his elder brother, Prince Albert Victor, Duke of Clarence and Avondale (bio here) in 1892 leaving George as heir apparent to the throne of England. On 6 May 1910, King Edward VII died, and George became: 'His Majesty George V, by the Grace of God, of the United Kingdom of Great Britain and Ireland and of the British Dominions beyond the Seas, King, Defender of the Faith, Emperor of India' and his wife became Queen Mary. 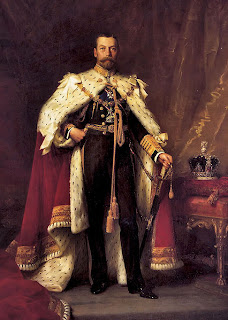 On the 28th June 1914 the heir to the Austro-Hungarian empire Archduke Franz Ferdinand of Austria (1863–28 1914)(bio here) was assassinated in Sarajevo. Two months later in August 1914 Britain declared war with Germany. The German Kaiser Wilhelm II (bio here), who for the British public came to symbolise all the horrors of the war, was the King's first cousin.

By default Australia and it's people entered the First World War at the same time. Patriotism for Britain saw many hundreds of thousands of Australians 'hear the call' in defence of 'Mother England'. Many no doubt romanticised about the adventures they would have in what they expected to be a short conflict. 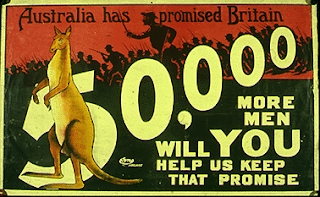 The strong anti-German sentiment of England upon the outbreak of the First World War with Germany caused a change to the name of the royal family from Saxe-Coburg-Gotha to Windsor. To stress his support for the British, the king (having German relatives) made several visits to the Western Front to reassure the troops. In 1915 George's horse rolled on top of him and he broke his pelvis in France. He remained in pain for the rest of his life from the injury. 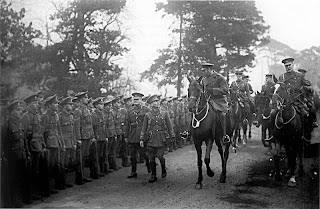 The Australian Government was swift in attempting to stimulate recruitment to increase the man-power available for the war effort. Posters urging enlistment were hung in every locality in Australia and postcards sent to any man who hadn't yet enlisted. Conscription was forbidden in Australia at the time. Australian soldiers soon became 'fodder' for the shells, gun fire, and bayonet fighting at the Battles of Mons (here), the Marne (here), Ypres (here), Gallipoli (here), the Somme (here), Passchendaele (here) and others... 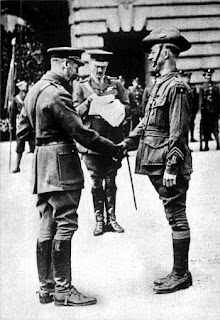 In 1930 Sir Isaac Alfred Isaacs (1855-1948)(bio here) was appointed by Prime Minister James Henry Scullin (1876-1953)(bio here) as the first Australian born Governor-General of Australia. His appointment resulted in opposition from within the Government and overseas. George V was opposed to appointing a ‘local man’ preferring an appointee from Britain, who could 'better unite the Empire'. The Australian protesters believed that an Australian appointee could not be politically impartial and would jeopardise Australia's ties to the British Empire. Isaacs's appointment was sanctioned by George V, however he made a clear implication of  his displeasure. 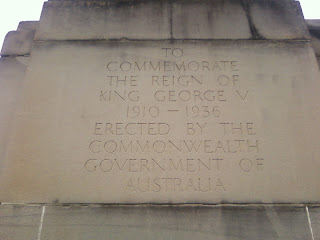 After the death of King George V in 1936 the Australian Government commissioned a memorial. It is believed to be the only memorial to an Australian Head of State erected by the Commonwealth of Australia. A competition was held and a design by George Rayner Hoff (1894-1937)(bio here) was selected. 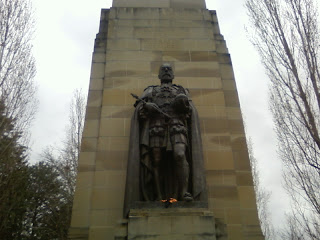 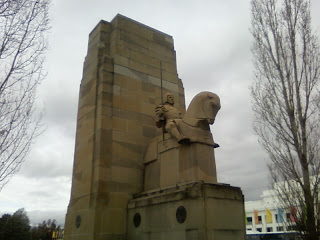 The Memorial was unveiled on 4 March 1953. It was positioned directly in front of Parliament House but was moved in 1968 roughly 20 meters to it's present site. The Memorial now has a lower podium and has been re-aligned east-west. 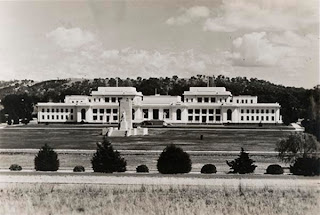 King George V suffered a series of debilitating attacks of bronchitis and died the year after his silver jubilee on the 20th January 1936, aged 70. He had reigned for 25 years and was succeeded by his son Edward VIII (1894–1972)(bio here) upon his death. George V is Australia's current ruling monarch Queen Elizabeth II's grandfather.

After the war the history of Gallipoli was documented at 'Tuggeranong Station' Canberra (post here). War Historian Charles Edwin Woodrow Bean (1879-1968)(bio here) occupied the Homestead from 1919 to 1925 where they commenced the task of writing the Official History of Australia’s involvement in World War One. 'Tuggeranong is therefore where the ANZAC legend was launched.