The Ginninderra Creek that flows through the Belconnen satellite town of today's Australian Capital Territory looks to be an average, gentle flowing creek of unassuming proportions. This creek's steady flow once watered the land and stock holdings of Edward Kendall Crace (1844–1892)(bio here). It appears to be a 'pretty' little creek with sporadic rock outcrops along it's length and the presence of Aboriginal axe grinding grooves confirm consistent Indigenous use of the creek pre-dating European settlement by several hundred, possibly several thousand years.

The image below is of a painting by Constance Gordon-Cumming of 'Ginnindarra Creek looking to Murrumbidgee hills, Murray County, N.S. Wales, 30th Aug., 1875'. 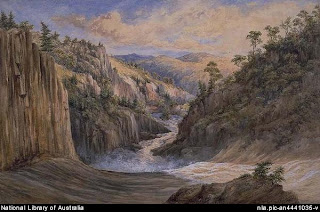 Image National Library of Australia (here)
Crace was a pastoralist who owned the extensive properties of Ginninderra, Gungahlin and Charnwood Stations around Canberra. He arrived in Australia in 1865 and by the 1870's had acquired 30,000 acres of land in the 'Limestone Plains' (Canberra) district. The Ginninderra Station creek however can be a wild, dangerous torrent and crossing the creek in heavy weather was fraught with danger. After constantly crossing the creek for more than twenty years things suddenly turned to grief. In 1892 at the age of 48, whilst trying to cross a flooded and angry Ginninderra Creek, both Crace and his overseer perished in the floodwater. 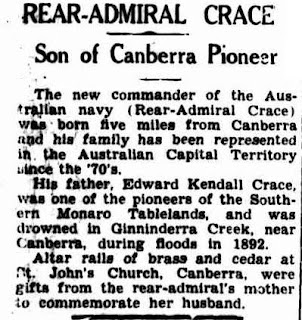 The Canberra Times, Monday 6 November 1939, page 2
National Library of Australia (here)
Ginninderra Creek flows across the Ginninderra Plain and through the Gungahlin and Belconnen regions of Canberra. The creeks catchment covers approximately 32,000 hectares and now handles a quarter of Canberra's suburban storm water. The water is today fed through the man-made 'Lake Ginninderra' used as a settling pond before finally discharging into the Murrumbidgee River. That same storm water continued to provide quite a hindrance to travel in the district during stormy weather as there were no bridges to afford a safe crossing. Some years after Crace's death Mr P. F. Blewitt nearly suffered the same fate... 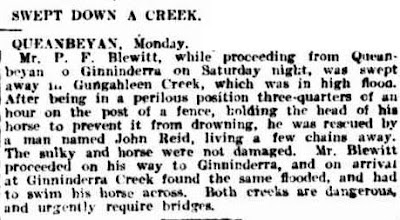 
Seventeen years after Blewitt's experience with the Ginninderra Creek, and nearly thirty-five years after Crace's demise, a bridge was finally constructed by the Federal Capital Commission and operational in 1926. 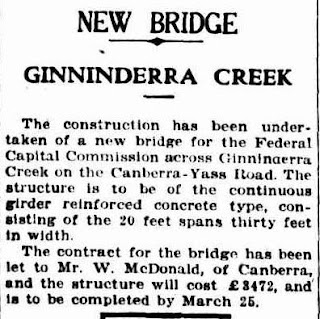 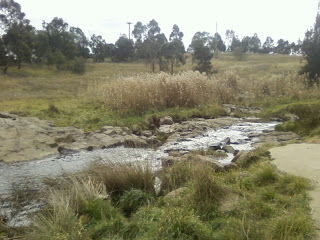 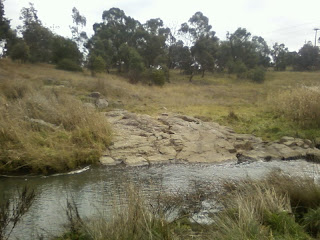 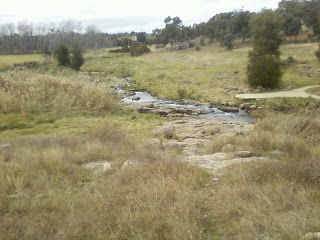