The Ginninderra Blacksmith Shop is a remnant of pastoral settlement in the area that is now known as Australia's national capital, Canberra. Apart from servicing the needs of horse shoes and transportation repairs (e.g. wagons, drays, coaches) the workshop also serviced the community with tools, machinery parts, nails, gates and their fixings and door furnishings for 80 years. The 'smithy' was also a social centre for locals, especially in winter. 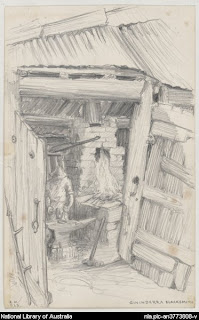 The workshop is a long rectangular building built of timber with walls clad in corrugated iron and original timber slabs (post here). The Ginninderra Blacksmith’s Workshop was built in circa 1860 and operated consistently until it's last blacksmith retired in 1949 aged 80. The roof is gabled and covered in with corrugated iron. The floor is earth.

1860
James Thomas Hatch arrived at Ginninderra in 1860 and may have established the workshop. He did not stay long however, and upon leaving the area was replaced by Flourence Joseph McAuliffe who stayed ten years.

1870
George Curran then operated the workshop until 1889 and was very active in the local community and it's organisations. He also played in the cricket team and supported the 'One Tree Hill' Jockey Club. One of the famous Ginninderra Cricket team, Johnny Taylor (post here), a local Aboriginal man, worked for George. Many meetings for these organisations were held in the shop. Curran's nephew Henry (Harry) Roland Curran, was his apprentice. George and Harry operated the blacksmiths for 19 years then moved to Bungendore.

1891
Harry Curran returned to Ginninderra and recommenced working the blacksmiths. Harry extended the building adding on a skillion roof and cladding the walls and roof with second-hand corrugated iron. He then worked the shop for a further 58 years.

1949
Harry finally retired in his eighties and with no-one to replace him the place became quiet and deserted, slowly going to ruin.

1990
The building was listed on the ACT Heritage Register.

2004
Conservation work on the building is organised by ACT Heritage and and funded by the ACT Government, was completed in 2004.

The building is owned by the ACT Government and is therefore their responsibility but unfortunately it has been neglected for many years. The very limited conservation work that was funded and carried out in 2004 was just that, very limited. The workshop is today surrounded by a chain link fence to prevent vandalism. The large bellows is still inside the workshop and many horseshoes have been recovered in archaeological exploration. 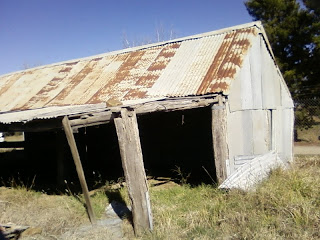 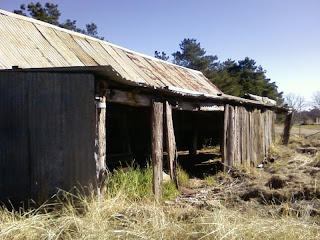 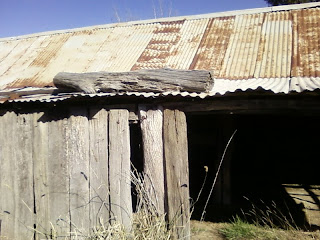 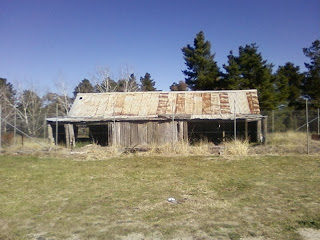