The Scots, as everywhere in the world they have migrated to, heavily influenced the history of the Australian Capital Territory. From it's earliest settlers and labouring convicts who left their mark with substantial stone homes, dairys, barns, cottages and walls having established the agricultural enterprises that shaped a future settlement and eventually the national capital of Australia. 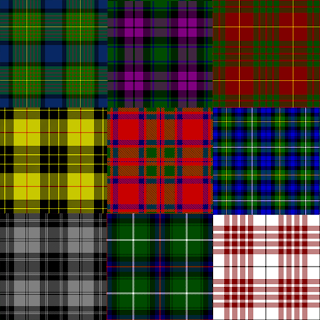 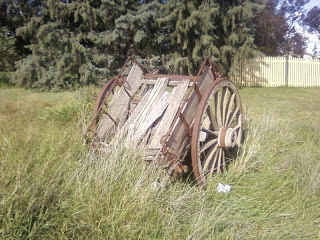 The Campbells were once the most powerful of all the Scottish clans. Duntroon has been since 1910 the home of the Royal Australian Military College 'Duntroon'. Robert Campbell's informed his nephew George Thomas Palmer, another Scot, of the fertile grazing land on the banks of the Ginninderra Creek and by 1826 Palmer was squatting there. St John the Baptist Church (post here) in today's Canberra suburb of Reid was founded by Scots.

The Canberra Highland Society and Burns Club (Scottish heritage) was founded early in Canberra's history in the recreation room of the 'Hostel No 1 Camp' which was used to house the original workers that established the newly proclaimed Australian National Capital 'Canberra'. The building later became the Hotel Canberra in 1924. Many of Howie’s (contractor) men were Scots – and there are rowan trees in nearby Stirling Park planted by the Scots.

The new society wasted no time in securing land for their society and 'Burns Club' and set about establishing a permanent Scottish landmark by fund-raising with entertainment evenings at the site for a memorial to 'Scotland's favorite son' 'Rabbie' Burns. 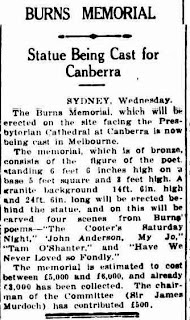 The Bronze Canberra Burns Memorial was erected by Canberra Scots in honour of the Scottish poet Robert Burns (1759–1796)(bio here) in 1935. The Burns memorial sits gazing 'deep in thought' towards today's Parliament House on the corner of Canberra Avenue and National Circuit. 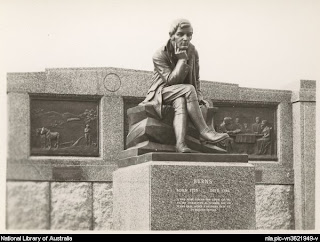 This was also once the home of the original Burns Club in the ACT (the club sitting directly behind the monument) until the mid 1980's when it relocated to Kambah (post here). 'Rabbie Burns' remains the second oldest public sculpture in Canberra (after Bellona), and the first to have a permanent location. Burns Memorials are a worldwide phenomenon and there is a list and information on them (here). 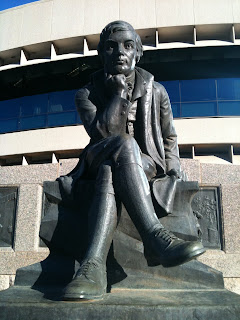 'The Burns Club was initiated to foster the culture and heritage of Scotland.  In those early days the works of Famous Scottish poet Robert Burns were read by the members at 'Burns Evenings'. 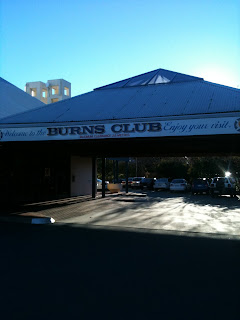 The Burns club celebrated it's Diamond Anniversary (75th) in 1999 and is the oldest licensed club in Canberra. I have attended (and enjoyed) a 'Burns Supper' at the club with all it's pipes and drums, swirling kilts, toasts, feasting and of course 'Haggis' (info here). The club maintains traditions dating back 200 hundred years. The ACT Library has a comprehensive information on the memorial (here) and the Burns Club website is (here).

Wham will we send to London town
To Parliament and a'that?
Or wha in a' the country round
The best deserves to fa that?
For a' that and a' that,
Here's Heron yet for a' that!
The independent commoner
The honest man, and a' that!