When one thinks of the game of croquet, images of  ladies at 19th century garden parties, or perhaps the game played by Alice against the nasty Queen of Hearts in Lewis Carroll's 'Alice's Adventures in Wonderland' come to mind. Canberra in the Australian Capital Territory has a long association with croquet with the Canberra Croquet club house and greens nestled at the foot of Australia's Parliament House.

A form of the game was originally observed being played by peasants in France and was dated to proliferate from Ireland to England circa 1850 with Spratt's rules of croquet (bio here) published in England in 1851. In the beginning croquet was most popular among women. It enabled them them to play a game outdoors in the company of men. As such early games of croquet were carefully chaperoned. 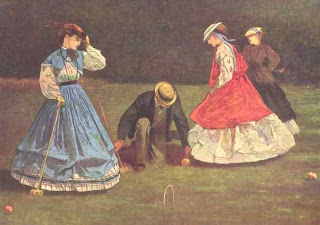 The game of croquet is played on a level 'court' roughly the same size as two tennis courts. Croquet is actually more akin to billiards. By using a 'mallet' a player by uses one ball to hit another in a specific direction. The object of the game is to make the struck ball pass through a hoop that may only be 5mm wider than the ball. The hoops are passed in order until a 'peg' is struck in the middle of the court. For a comprehensive description on how to play croquet go (here).

By 1881 the game was adopted in America when the Newport Croquet Club was formed on Rhode Island. The Americans then introduced a version of 9-wicket croquet at the 1904 Olympics in St. Louis for the first (and only) time. The sport at the St. Louis Olympics was called Roque (c roque t)(info here). 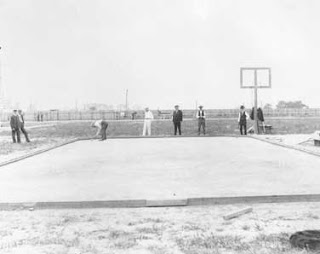 Men's Rouqe Competition at the St. Louis Olympics
Image Wikipedia (here)
In 1925 the Hostel No. 1 (which became the Hotel Canberra and then today's Hyatt Hotel) opened with a bowling green and a croquet lawn for its guests. The Canberra Croquet Club was established on the 8th March 1928 with 41 members who were given permission to play on the lawn at the hotel. 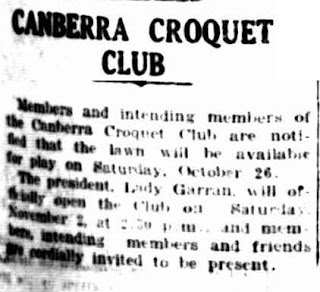 The Canberra Times - 23 October 1929
National Library of Australia (here)
There being no clubhouse at the time the members used a room at the hostel as a change room and rent was paid courtesy of the Federal Capital Commission. New members were taught by experienced members from other clubs and a prize of one guinea was once awarded in a tournament that only those who learned to play at the Hotel Canberra could compete in. 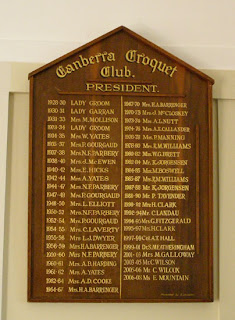 The clubhouse was opened in 1933 and men were finally allowed to become members in 1976 and initially four men joined the club. In December 1994 the clubhouse and grounds were listed on the Heritage Places Register.


Some images of the clubhouse and a map are below. 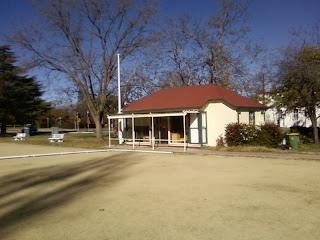 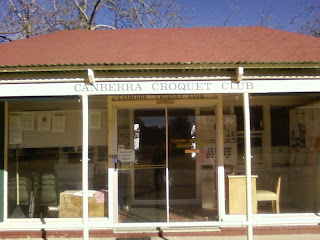 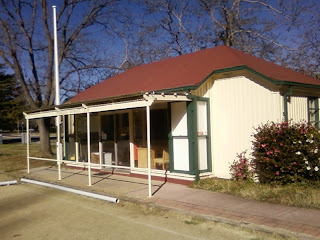 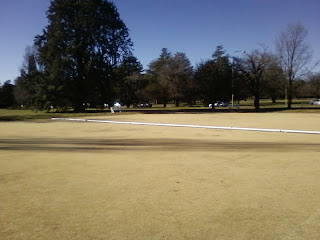 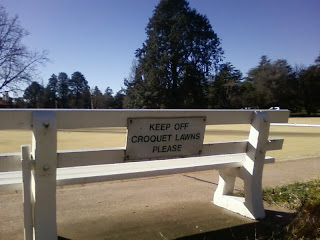